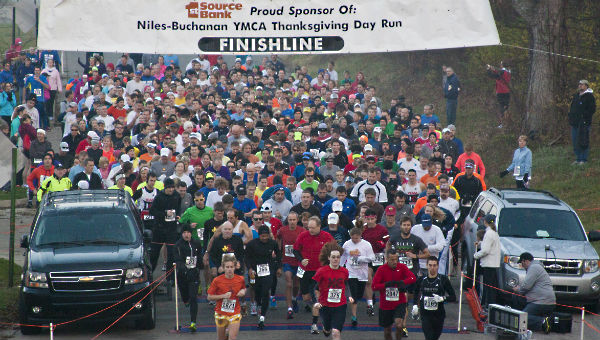 The 2020 Thanksgiving Day Run will be held virtually for the first time in 39 years starting Nov. 26. (Leader file photo)

NILES — A pair of Thanksgiving traditions have announced changes for 2020.

The YMCA of Greater Michiana announced Tuesday afternoon that it was switching its annual Thanksgiving Day run to a virtual event for the first time in its 39 years. The move comes after the state of Michigan announced changes to its current COVID-19 guidelines on Sunday.

Additionally, the 53rd annual Turkey Trot, sponsored by the Dowagiac Union High School Athletic Department, has been postponed until March 2021. Initially, the event was going to be hosted with rolling starts to keep social distancing on Nov. 22.

The YMCA also had planned to host its annual races, which draws thousands of runners and walkers to Niles each Thanksgiving morning, as planned. However, with Gov. Gretchen Whitmer and the Department of Health and Human Services’ new orders, having a virtual race was the best way to go.

“We’re always looking for creative ways to encourage Michiana residents to be active while staying safe, and the virtual race option really made sense,” said Mark Weber, CEO of YMCA of Greater Michiana.

Participants can complete their 10K or 5K run, and 5K walk, anywhere, including their own neighborhoods, parks or on a treadmill, anytime between Nov. 26 and Dec. 6. Once a participant completes the run or walk, they should upload their run information to an online race platform.

The YMCA is also encouraging participants to share their photos on social media using the hashtag #2020TDR.

Registration remains open. Until Nov. 24, the cost is $30 per person or $25 per person for households of two or more participants. Late registration on Nov. 25 or Nov. 26 is $35. Runners and walkers may register at ymcagm.org/TDR. All virtual participants will receive race bibs and T-shirts.

Proceeds from the Thanksgiving Day Run support the YMCA’s annual campaign, which provides youth programming and financial support for families through membership scholarships.

“We also hope the virtual run will be an opportunity for new participants to get acquainted with the Y and take advantage of our Black Friday offer, which is $0 joining free through Nov. 28,” Weber said.

Gunn said he was hoping to get the go-ahead to hold the event with social distancing at Monday night’s Dowagiac Board of Education meeting. When that did not happen, he decided it was best to move the event.

“We are going to run it in March,” he said. “Maybe we will call it the Spring Turkey Trot, or something like that.”

Gunn said a new date will be announced after the first of the year.

SOUTHWEST MICHIGAN — Berrien County has reported one new COVID-19 death, according to the Michigan Department of Health and Human... read more