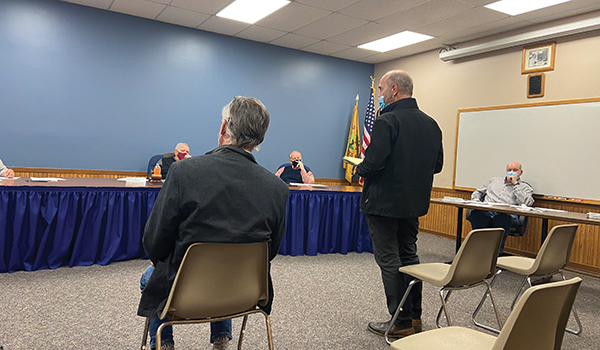 Greg Kil, of Kil Architecture, voiced support at the Niles Charter Township meeting Monday evening for a resort amendment to the zoning ordinance. Kil is working with the owners of The Morris Estate on their development plans. (Leader photo/CHRISTINA CLARK)

The zoning ordinance, which had previously been passed and nullified after the meeting was rendered illegal, was passed the board again with a six to one vote from board members, with further amendments.

After surveying the room and doing a headcount, Treasurer Jim Ringler announced that due to the rising cases of COVID-19 in the area and the board room’s small capacity for spacing, they would bring two people in from the hallway at a time during the public comment portion of the agenda. The door remained open so residents could hear the meeting’s proceedings.

Much of the discussion Monday evening revolved around a resort ordinance.

At a special meeting on Nov. 4, the board voted to pass a zoning amendment unanimously, with Clerk Terry Eull absent. The amendment defined an area a resort could occupy as needing to be on 80 contiguous acres, as opposed to the originally proposed 20 acres.

However, the original vote was nullified, requiring the board to again discuss and vote on the matter Monday.

“We think its nullified because we didn’t have a one board member here, and at a special meeting you have to have all the board members here,” Ringler said.

Around 10 residents from the area surrounding The Morris Estate, which intends to utilize the resort ordinance to expand its offerings to include luxury cottages, permanent structure for receptions and restaurant on-site, attended the meeting to voice concerns and ask questions.

Ann Gaines, a resident near The Morris Estate’s property, asked if anything else was to be considered at the meeting, aside from the acreage.

“We are talking about amending and adding in resorts [to the zoning ordinance],” Trustee Richard Cooper said. “The 20 acres to 80 acres was basically changed. It was felt by the board at the time that 20 acres was not enough. It would be a special land use that people could apply for under [the] resort [amendment], which means it comes before the planning commission to be voted on, and we hold a public hearing, where we decide whether to grant that.”

Denise Kasprzak, zoning administrator, said in the case of a public hearing the township places a public notice in the South Bend Tribune and notifies both property occupants and owners within 300 feet of the property of the hearing 15 days prior to the meeting.

Other residents, like William Barker, were concerned about the amendment allowing for buildouts that may affect the property he owns.

“We got our property for the peace and quiet,” Barker said. “[The Morris Estate]’s reception place is down on Morris Drive. We can still hear it from our house on Phillip Road. They put a hotel in our backyard, that changes our quality of life. That is not acceptable.”

The board responded that the amendment will impact the entire Niles Township, not just a specific project.

There were residents who voiced their support of the amendment as well, including the Rory Iwaniuk, who works with code enforcement for the city of Niles.

“I read over the ordinance,” Iwaniuk said. “Part of my job with the city is dealing with ordinances and zoning. I think you’re on the right track with that ordinance. The last thing we want is 20-acre resorts tacked all over the place. I know there’s a lot of emotions going on with this thing, but being one of the residents that is surrounded by this property on all four sides. I’ve got nowhere to run. I would rather see an 80-acre resort, than another subdivision or several 20-acre resorts.”

Iwaniuk also stated that Airbnb’s had been popping up around the area and were becoming difficult to keep track of, as they were not following zoning protocol and registration.

Following the public comment, the township board went into discussion that lasted more than 20 minutes about the ordinance amendment.

Before the resolution could be voted on, board members added an amendment to the voting language. The amendment included a change to include wording to allow the special land use to be applicable to all zoning districts, such as residential, industrial, agricultural, as well as a change of requiring a minimum of 80 contiguous acres, as opposed to the originally proposed 20 acres.

The resort amendment was passed by the board in a six to one vote, with Eull voting no.

NILES — One day after Michigan closed high schools across the state to “Pause to Save Lives” amid the second... read more