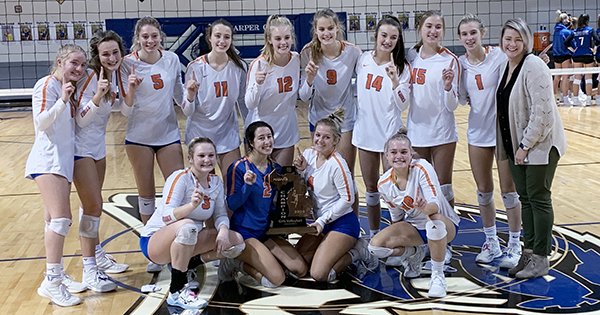 BATTLE CREEK — There was a time this fall that Edwardsburg senior Brooklyn Broadway thought her volleyball career was over.

She had just been involved in a car accident and suffered an injury to her wrist. What laid ahead was some healing and physical therapy.

Broadway endured the painful process and returned to the Edwardsburg lineup in time for the end of the regular season and the state tournament.

For the fourth straight year, Edwardsburg was in the regional championship game. In the previous three years, the Eddies were thwarted in five sets.

Broadway and the Eddies were not to be denied this year as Edwardsburg swept from the Division 2 regional field, beating two-time defending champion Hamilton on Tuesday and topping host Battle Creek Harper Creek Thursday night.

Both matches were sweeps. Edwardsburg dispatched the pesky Beavers 25-23, 25-20 and 25-17 for a spot in Tuesday’s state quarterfinals against No. 1-ranked Grand Rapids Christian.

Broadway said beating Hamilton earlier in the year was a big hurdle the team needed to clear.

“We beat them earlier in the season, and that was when I wasn’t there. We were not overlooking them. We were prepared and knew we could not look past it. We worked as a team to overcome them.”

Broadway said she tried not to look at the score as the Eddies closed in on the victory and the title.

“I tried not to let it get into my head that we were going to win it,” she said. “It still doesn’t feel real because we hadn’t won regionals since 1992. That has been our goal since the beginning of the season.”

Broadway finished with a team-high 23 digs.

Edwardsburg coach Nikki Bush was so happy for her team. She was also impressed with how scrappy the Beavers were.

“We kind of let them back in at the end [of the first set],” she said. “We talked about how we can only control what we do, not what they were doing. You can control your play and your mindset. We just had to reel it back in a bit and just focus on what we could control.”

Per usual, the Eddies were strong upfront at the net. Macey Laubach and Liz Pederson both had nine kills, while Sophie Overmyer finished with six and Paige Miller five.