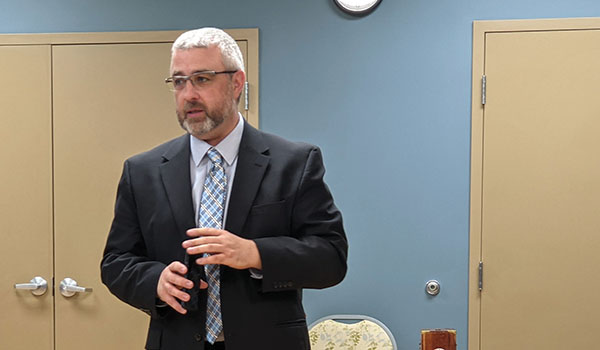 DOWAGIAC — The Dowagiac Rotary Club hosted a humanitarian presentation during its meeting Thursday at Front Street Crossing in Dowagiac.

Conrad Vine, president of Adventist Frontier Missions in Berrien Springs, was invited to speak to the club about the worldwide persecution of religious and ethnic minority groups.

Born and raised in the United Kingdom, Vine worked in the UK public healthcare system before serving as an Adventist Development and Relief Agency representative from 1996-2002.

“I’ve lived and worked in about 40 countries around the world,” Vine said. “I’ve seen ethnic cleansing executions upfront and personal. It leaves a scar on your mentality and your mind. Some things you can never unsee. Man’s capacity for inhumanity to man is almost limitless.”

According to Vine, AFM has missionaries in more than 22 countries around the world.

“We deal with people who are facing real persecution on a daily basis, even here in the United States,” Vine said. “We need to be more aware of the reality of what happens to minorities around the world.”

Vine emphasized that he was not just talking about Christian persecution, but persecution of all religious and ethnic groups. He mentioned the Uygurs, a Muslim, Turkish-speaking ethnic group from northwest China. The Chinese government has imprisoned more than one million people since 2017 and subjected those not detained to intense surveillance, religious restrictions and forced sterilizations.

“As a follower of Jesus, I’m concerned that all people having the freedom of conscience is important for any society to thrive,” he said.

According to Vine, one of the main reasons there is religious persecution today is because totalitarian governments do not want people to have any religion.

“If you have a religious faith, that means that you have a claim on your conscience higher than the claims of the government itself,” Vine said. “Totalitarian regimes reject religion per se because they don’t want you or I to have a higher claim on our behavior.”

The best ways to respond to those who have been persecuted are to stand in solidarity with them and to show them respect, Vine said.

“Sit down with them and ask them to tell you their story,” Vine said. “Or sometimes, don’t say anything at all. Trauma and grief they hold can be so profound. If you’re aware of someone in this community who has gone through trauma, or a refugee who has come to America because of persecution in their homeland. Show them respect and listen to what they have to say. They will tell you stories of horrendous suffering but it’s incredible the way the human spirit can overcome that.”

Lastly, Vine urged Rotarians to speak up for the voiceless.

“There are many people today who fear that if they speak up on social media or the internet, they will be closed down at best, and at worst, they could be executed,” Vine said. “We need to stand for the religious freedom of conscience. Otherwise any society without those freedoms will eventually wither away.”