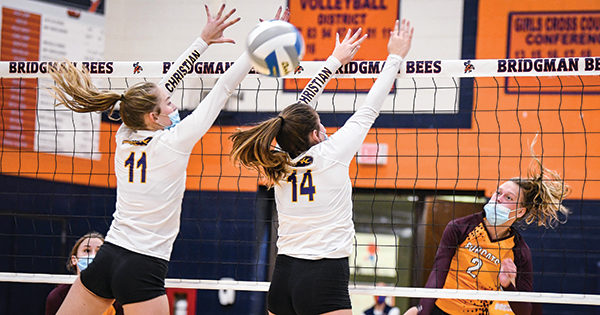 “My hat goes off to Kalamazoo Christian,” said Brandywine coach Ray Prestly. “They gave us a good run, and that’s what we need. We need to learn how to take what momentum we have to keep pushing ourselves. This is one of the most demanding mental games. My hat goes off to my girls for a heckuva season. Everything they had to go through to make it here, I’m extremely proud.”

Senior Kristen Alvord led the team with 15 kills, seven digs and two aces, and Kadence Brumitt had nine kills, one dig, one block and one ace. Clara DePriest has one kill, 15 assists and seven digs, and Elizabeth Stockdale had 12 assists and two digs. Olivia Laurita added four digs.

Trailing 8-6 in set two, with Alvord serving, the Bobcats went on a 6-1 run to take a 12-9 lead that they would not relinquish and held on to win the set by four points.

“We do a thing called ‘hot hitters’ where if we know who’s hot, we stick with them,” Alvord said. “We stuck with it and our serve-receive was good, too.”

“They turned the heat up,” Presley added. “I just made some suggestions based on what I see over here and they went with it. They found their mojo.”

The Comets took control in sets three and four, using their size advantage and capitalizing on Brandywine errors. In set four, Kalamazoo Christian used a 12-2 run to take a 19-7 lead that the Bobcats were not able to overcome.

Presley was proud of the resilience his young team has shown throughout the season.

“We’re a talented team. We’re a young team,” Presley said. “They’ve done a great job building this program. It’s a good program. Two years in a row we’ve made it here. Every time we stepped on the court, they gave everything they had. Win or lose, they’re still winners to me.”

While Alvord would have loved to extend her career one more game, she is proud of what she has accomplished over the course of four years.

“It’s hard because some of the girls I’ve played with since they were freshmen,” she said. “There’s a lot of good, funny memories. I’m happy that I’ve been able to spend four years making it to regionals and playing with great teams.”

BENTON HARBOR — Lake Michigan College has invited nearly 40 colleges and universities from throughout the Midwest to participate in... read more