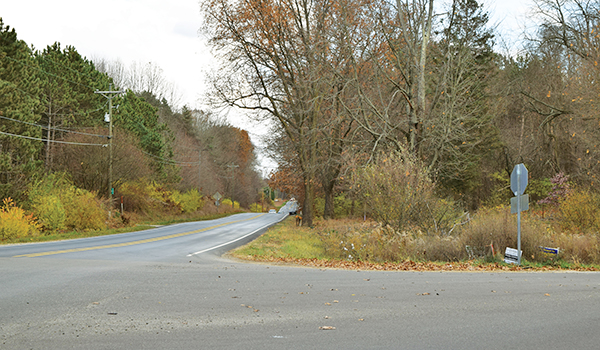 MILTON TOWNSHIP — A roundabout is in the beginning stages of development for Redfield Street and Gumwood Road.

According to Milton Township Supervisor Eric Renken and Cass County Road Commission Chief Engineer Joe Bellina, the new roundabout near the Indiana-Michigan state line is projected for fiscal years 2022 and 2023. The CCRC was granted a Safety Grant last week from the Michigan Department of Transportation to cover $581,672 of the construction costs.

“What we’re going to be doing, specifically, is a three-leg roundabout at the eastern intersection,” Bellina said.

The split intersection of Gumwood Road and Redfield Street is an area traveled by Indiana and Michigan residents alike. Approaching the area on Gumwood Road at “rush hour” between 4:30 and 5:30 p.m. during the work week means a wait in traffic to take the dog-leg across Redfield Street. Gumwood Road has become considered a “primary road” in the state and county as traffic has increased.

Bellina said the CCRC and Milton Township did a joint study of the intersection in 2014.

“We did a feasibility study on what the options were, and what the best option would be to solve the issues of the intersection,” Bellina said. “I recall we took a look at eight different options and eventually, came about to a roundabout being the most successful selection in the process.”

While the discussion and study has gone on, Renken said the CCRC was also working to secure funding for the project.

“We started talking about it years ago,” Renken said. “The last few years the CCRC has been trying to get a safety grant.”

Safety grants through MDOT, according to Bellina, are awarded to an array of improvements needed, including intersection development, tree removal and guard rails.

“It’s an open category at MDOT,” he said. “It’s a very intense competition for those funds.”

The grant analysis takes into account the return on the funding.

“It’s basically tied to accident ratios and seriousness of the accidents,” Bellina said. “We take a look at what’s actually been going on and there’s a prediction model that goes with it as well. [The analysis] takes a look at what the accidents are that have occurred, compared to the cost of construction.”

The first two years of applying for the safety grant with MDOT, the CCRC did not receive the funding.

“On the third year, this year, they called us last week and informed us that we made the grade,” Bellina said.

Renken estimated the grant amount would fund 80 percent of the needed construction to build the roundabout.

Renken said he would be bringing it to the next board of trustees meeting at Milton Township on Nov. 17.

“I want us to participate in funding it. I think it needs to happen,” Renken said. “The township technically would not need to fund it, but with all the budget cuts, I would like to see it get gone. I would like the township to chip in.”

Both Renken and Bellina are excited to move forward on making the intersection safer for those who use it.

“It is an exciting project,” Bellina said. “We’ve been waiting a long time to do it, and I think it will be good for the community.”

NILES — Vehicles lined up at Drive and Shine’s newest location in Niles on Friday to take advantage of a... read more