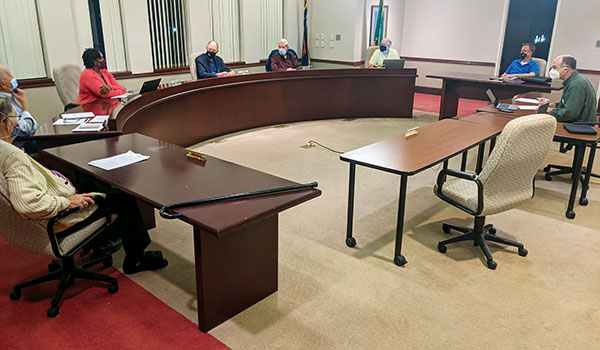 DOWAGIAC — A property proposal was the lead topic during the Dowagiac City Council meeting Monday at City Hall.

The council adopted the resolution to vacate the public alley running east and west between W. Railroad and Oak streets in the 400 block of W. Railroad St. The city will retain an easement that allows for utilities should they be needed at a future date.

“A couple of months ago, four property owners with property adjacent to the alley approached us,” said city manager Kevin Anderson. “They were wondering if they could take over the property so that they could maintain it and expand their yards. The city has some utilities underneath that we’re keeping an easement over. The only time the city would ever need to go in there is if there’s a repair or replacement that is needed.”

Anderson said that the abandonment of a right-of-way requires notification to all impacted property owners and a public hearing. Half of the right-of-way will go to each of the abutting property owners. Anderson expects that process to take roughly 45 days.

“In matters like these, you have to call for a public hearing and notify everyone within 300 feet of the property in question about it,” Anderson said. “Now that the resolution has passed, it’s a matter of us filing documents with the county, and then once we file those documents, the property ownership piece will be official.”

According to Anderson, the vacation of alleys is common as their utilization has decreased over time.

“There was a day and time where alleys were important because that’s where people had garages,” he said. “Over the years, these small, short alleys have only been used by three or four houses.”

The agreement benefits both the property owners and the city, Anderson believes.

“These people have free use of the properties,” he said. “It will be good for the city because the people will do a great job taking care of the property.”

In addition to the alley vacation, the council agreed to renew its contract with Kalamazoo-based Pride Care Ambulance service. The city will continue to contract with the service for another three years, with the terms of the contract set to expire in 2023.

According to Anderson, the city has contracted its ambulance coverage to Pride Care for several years as members of the Cass/Van Buren Emergency Service Authority. The authority consists of the city and several neighboring townships, including Wayne, Silver Creek, Pokagon, LaGrange, Volinia and Keeler, all of which are covered by Pride Care paramedics.

“Historically, we’ve had an agreement with Pride Care that we share their services with neighboring townships,” Anderson said. “Because of the size of that, they have been able to provide service at no taxpayer support. It’s all done through billable services through insurance companies and that sort of thing.”

Pride Care operates stations in the city as well as Wayne and Keeler townships. Vehicles are constantly repositioned to cut down on response times, and Pride Care can also call in vehicles from outside the authority service area to help when needed.

“This agreement puts us in a good place, financially, for close to another decade, if all continues.”

In September, the council approved resolutions authorizing $5 million and $5.17 million in loans from the USDA for sanitary sewer improvements. The two loans will cover manhole improvements, sewer line improvements and significant improvements at the wastewater treatment plant.

The loans will be for 40 years at an interest rate of 2.5 percent, According to Anderson. Design work has already begun, and construction is expected to begin during the summer of 2021 and continue for approximately 18 months.

“When we got our approval from the USDA a few months ago, we would start to see a whole series of things,” Anderson said. “You’ll be seeing some agreements and actions like this that are all part of the standard routine. This is just the next step towards getting the sewer system taken care of.”

SISTER LAKES — There is a new store in town — one located in a familiar space for longtime Sister... read more