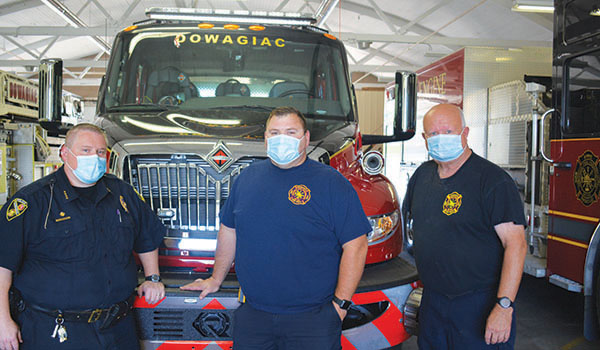 DOWAGIAC — It has been a busy year for the Dowagiac Fire
Department.

On Oct. 27, the department set the record for the number of fire calls received in a calendar year at 317 calls.

“They’ve been very busy,” said Steve Grinnewald, Dowagiac director of public safety. “An average of one call per day might not seem like a whole lot to people, but some days are much busier than others. Some days we’ll have five or six calls a day. They’ve been responding and have done a great job.”

The DFD has seen a significant increase in fire calls in recent years. According to an article published by the Dowagiac Daily News in 2004, the Dowagiac Fire Department was averaging 150 calls per year in the early 2000s.

“It’s difficult to pin the reason for the increase on just one thing,” Grinnewald said. “We have agreements with municipal departments around us, so we often assist when needed. It’s also been a strange year for everything. We’re needed a little bit more this year.”

The DFD is a combination department consisting of both career and volunteer firefighters. The firefighters must maintain Fire Fighter II Certification, which requires 250 hours of training over the course of five months.

“We get a good response rate in terms of on-call response,” Grinnewald said. “The department trains together on the first and third Wednesday of the month for three hours, so everyone is familiar with the equipment. If you don’t use it, you lose it, so it’s important to train consistently.”

Grinnewald said he appreciates the hard work the department has put in this year.

“Each time a fire call goes off, most of the time, our team is at work or with family and leaves to take care of the problem,” he said. “The job takes a lot of dedication. I’m proud of them, and we’re happy to be serving the community.”

The DFD recently celebrated a win in the second annual Battle of The Badges blood drive on Oct. 23, with the fire department edging the police department in number of pledges for the second straight year.

The drive collected 49 units of blood, which saves 147 Lives.

“I flipped a coin this year, so I pledged on behalf of the fire department,” said Grinnewald, who oversees both departments. “Our teams did a great job helping out. It’s a fun competition that helps save lives so we’re happy to do it.”