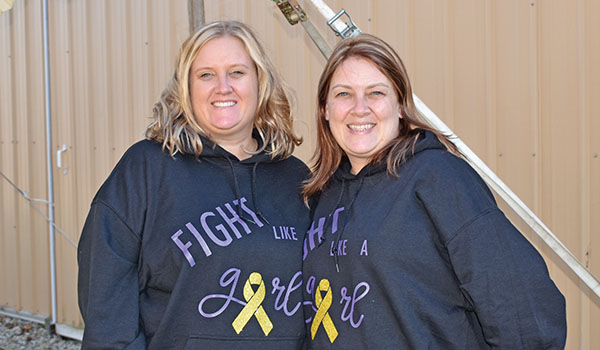 BUCHANAN — Despite Halloween calling for tricks and scares, many Buchanan and Galien residents spent this Saturday getting into the spirit of giving.

“We are just trying to raise some funds to help the family,” said Abby Smith, Lily’s godmother and event organizer. “The money raised will go for gas, car repairs, whatever they need.”

“We just want to help Lily and her family,” added Ashley Kirk, Smith’s sister and the event’s co-host. “I have a daughter the same age, so it really hits home for us.”

Lily was diagnosed in August. Since then, the family has driven to and from Bronson Hospital in Kalamazoo each week for her treatments. Smith said she decided to host the fundraiser as a way to help the family out in their time of need.

“I can’t imagine what they are going through, so we thought we could just help contribute in some way financially,” she said. “Lily, and her brother and sister, are my godchildren. They are like my own kids; I would do anything for them. When I first got the call that she had cancer, this was the first thing I thought of, hosting a benefit for them.”

Halloween was chosen as the date of the event, as it is Lily’s favorite holiday. While Lily could not attend due to her health, Smith said she knew Lily and her family appreciated the gesture.

A GoFundMe set up in Lily’s honor has already more than $11,000, and Smith said the money raised from Saturday’s benefit, which Smith said drew a strong response, will be added to that total.

Both Smith and Kirk said they were touched to see the way the community has responded to Lily’s story and stepped up to help.

“It’s wonderful, and it’s left us speechless at times,” Smith said. “When we raised $7,000 in a matter of days, we were speechless. Anything we can do to help them, we want to do it.”

Smith and Kirk thanked the community for making the event a success and hope to see continued support for the Mullens as Lily continues her treatment and recovery.

“We love [the family] and are here to support them,” Kirk said.

“We have their back,” Smith added. “We are thinking of hosting another benefit in the spring, but we are going to wait to see how things go and how she is doing.”

DOWAGIAC — Despite the ongoing challenges of the COVID-19 pandemic, one local organization found a way to provide children with... read more