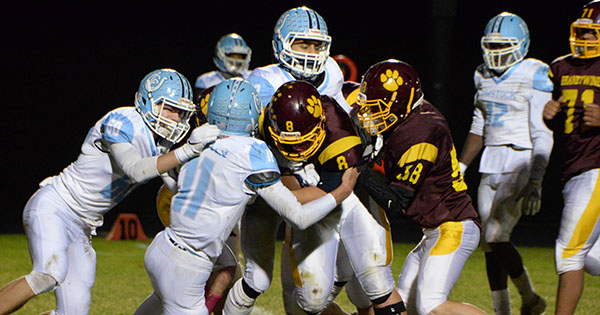 Cam Barrier and the Brandywine Bobcats won their first-ever playoff game with a 44-0 win over the Colts. (Leader photo/ERIKA PICKLES)

NILES — The Brandywine football team has made history — pandemic style.

During the first round of the MHSAA Division 6 playoffs, the Bobcats earned their first-ever playoff win, defeating visiting Comstock 44-7.

Typically, a playoff win – especially one that featured such a monumental moment – would be loaded with celebrations, loud fans and a fired-up band.

Those magical moments were missing on Friday night as the team celebrated among a very minimal crowd under a fairly quiet atmosphere.

“I am so proud of these kids, I just wish they could have experienced this with the entire community present,” said Brandywine coach Mike Nate. “Everything about a playoff game was missing, and I hurt for these guys. I know they would have given anything to experience a crowd running onto the field after the game and the band loudly playing their fight song. Unfortunately, these are the times we are in, and we are doing our best to keep them pumped up and motivated.”

Nate said he knows the community is showing strong support for the Bobcats, who are now 4-3. Live streams on YouTube and live audio from RCSportscasting.com have helped keep fans interactive during game time.

“It’s very different,” Nate said. “I give credit to the parents and fans who are in attendance because we know they are doing their best for these kids, given the circumstances.” Nate.

Brandywine played a nearly perfect first half against the Colts, entering halftime with a 44-0 lead. Quarterback Gabe Gouin put his leadership skills on display, leading the Bobcats with four touchdowns in the first and second quarters. He ended the game with 78 yards.

“Gabe played fantastic,” Nate said. “He was the leader we needed under our fairly young team.”

With five sophomores and three freshmen, Nate expressed the importance of having leaders his younger players can look up to.

“Some of these kids are 15 years old and have had to grow up fairly quick,” Nate said. “They’re experiencing high school football during very hard, trying times and I am so proud of what they have accomplished and learned this year.”

Freshman Brock and Conner Dye, who both scored one touchdown each during the playoff game, are prime examples.

In a game that saw ejections, physical altercations, and numerous penalties, all stemming from a frustrated Comstock team, the Bobcats had no choice but to control the game and their emotions.

Conner added that his team doesn’t single out younger players, as the older players view them as teammates — not lower classman.

“We’re all together,” Nate said. “We are a team. And we proved that during the game. When we stepped on that field and got between those white lines, we were ready and focused.”

Both players said it was an honor to be part of history.

Brandywine will head to Buchanan Friday night to take on the 6-0 Bucks in the second round of playoffs. Kickoff time is set for 7 p.m.