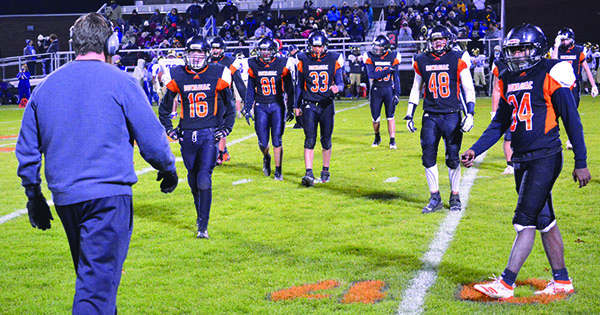 DOWAGIAC — When Dowagiac quarterback Malakai Haines found wide receiver Jordan Hardin for a 51-yard touchdown pass to put the Chieftains up 7-0 over visiting South Haven to start the second quarter, it looked as if the Dowagiac football team had the momentum in its favor.

But it was South Haven who would have the last laugh.

The win was South Haven’s first postseason win since 2008. Dowagiac’s season ends with a 3-4 record.

“You know, they were just swarming so much the first half, but we just stayed with it,” said South Haven coach Mark Eddy. “We talked about staying on a block and things like that and they just kept doing it and doing it, and the kids delivered.”

Trailing 14-7 entering the third quarter, a Dowagiac fumble was recovered by South Haven and on the next play, South Haven quarterback Kaleb Bodfish threw a 42-yard touchdown pass to put the Rams up 22-7.

In the fourth quarter, the Chieftains put together a drive that made it to the South Haven 18 before South Haven’s Trent Till recovered a lost fumble. A few plays later, Trevor Winkel ran into the end zone for a 30-yard touchdown.

“We get off to a good start,” said Dowagiac coach Randy Brooks. “Offensively, that pass was the first pass we’ve completed this year for a touchdown. Defensively, we struggled the whole night. Time of possession was way in their favor, and we just couldn’t get off the field. They were gouging us on runs to their strong side and we just didn’t have an answer for it the entire night.”

The Rams wore down the Dowagiac defense with their run game, finishing with 213 rushing yards compared to Dowagiac’s 97 yards. South Haven’s dominant ground game allowed them to have possession of the football for nearly 32 minutes.

“I thought South Haven played really well,” Brooks said. “They came off the ball and they beat us off the ball. We didn’t expect it, but they pounded the ball right at us.”

Haines finished 1-of-3 passing for 51 yards and one touchdown, and KeShawn Russel added none carries for 33 yards. Brayan Paredes and Wyatt Bailey led the team in tackles, with eight.

Dowagiac was without the services of three of its coaches Friday night, including its offensive and defensive coordinators, due to COVID-19 complications.

“That was adversity, and we’ve had it all year,” Brooks said. “We had three coaches off for two weeks right before this, and they got back, so there are no excuses.”

Frustration began to build for Dowagiac in the second half, with the Chieftains receiving several flags for unsportsmanlike conduct. It got so bad during the fourth quarter that a referee threatened to call the game early if Dowagiac did not stop.

“Unfortunately, we didn’t keep our cool out there, and that led to some penalties,” Brooks said. “It was not Dowagiac football. Certainly, it was embarrassing that it happened and a tough way to go out. We have a saying that adversity reveals character, and I think that’s what happened tonight.”

While the loss is disappointing, Brooks is glad that his team was able to participate in football at all this year. The Chieftains were able to renew their “Black & Blue” rivalry with Niles, which saw them best the Vikings 20-0.

“It’s a blessing just being able to play,” he said. “At least we got to play and had a chance to get out there and compete. We had an up and down year where we had our moments and played pretty well and it wasn’t tonight.”