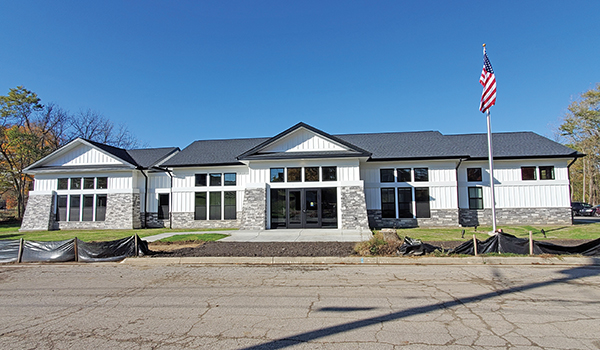 On Wednesday, the village of Cassopolis officially moved into its new village municipal complex at 121 N. Disbrow. The roughly 19,000-square-foot structure is now home to all city departments, including police, administration, public works and city council chambers.

“We are very glad to be here,” said Village Manager Emilie Sarratore sitting behind the desk in her brand-new office. “It’s a beautiful building, and it’s nice to have everyone under one roof.”

The project, which began construction in December 2019, cost roughly $2.8 million. According to Sarratore, the new building’s investment will end up saving the village in the long run by consolidating facilities and utilities.

The village was also able to sell its previous building on Broadway Street, allowing the village to recover costs and make available a desirable property.

While village headquarters may no longer be located on Broadway Street, the new building still connects to downtown and the cemetery. Additionally, Sarratore said the new location also offers the village a unique opportunity to develop the Disbrow area.

“We are still working on being connected, and we have a few more things planned as the streetscape project develops that will still give that connected feel,” she said. “We were really thoughtful in our planning process about where we should be and why we should be here.”

Though the project was approved in 2018, Sarratore said the village had long been considering the possibility of a new municipal building. For years, the village council has talked about finding a new space for the public works department, as the building it used to operate out of was a nearly 60-year-old converted house and garage. Eventually, talks turned to bringing all city departments together in one building.

“It just made the most sense for the way we operate and economically to be operating under one facility,” Sarratore said.

To Sarratore, the new building’s benefits are nearly countless, from allowing the village to take better care of equipment to offering police officers and other staff a full kitchen to use.

“This building will allow us to operate in a much more efficient and economical manner and allow us to serve residents in a much better way than when we were spread out of over six buildings,” she said.

Though there are still some finishing touches that need to be completed on the building, Sarratore is excited to begin serving the public from the new building after years of planning and work.

“It feels great to be here, first and foremost,” she said. “I’m proud of the council, and I’m proud of the staff for all the hard work they’ve put in to make this happen.”

CASSOPOLIS — At the October Board of Education meeting for Lewis Cass ISD, Superintendent Brent Holcomb submitted his letter of... read more