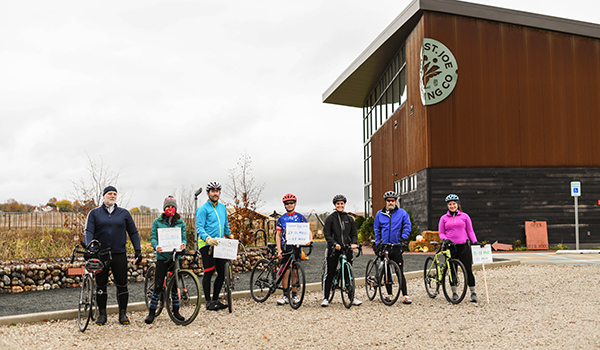 BUCHANAN — With the sun already hiding behind a thick layer of clouds on Tuesday evening, bicyclists arrived for a group ride with beating sun down in mind. People arrive decked out in cyclist kits, clip-in shoes and reflective gear. The energy was high as attendees greet one another, playing music from their vehicles as they recognized their fellow cyclists from previous rides together.

A group of around 20 cyclists on a damp, cold, and increasingly dark evening were the diehards of Bike Buchanan that had cycled almost every week since June 16. The last ride for the season was chosen as the days have gotten shorter, and the following Tuesday would be Election Day.

Liz Martin, the founder of Bike Buchanan, stood atop a stone barrier outside of River Saint Joe brewery and restaurant and announced how each of the five rides would be divided up that night.

“Thank you for coming out. I know it is super cold,” Martin said to the group. “I know we are wasting daylight right now, so, I will see you back at the brewery.”

Over the past three years, as Martin founded and grew the group, she has witnessed it grow from a single paced ride for all levels of cyclists and bicycle riders to six options on a well-attended week for everyone from new cyclists to Olympic-level athletes.

Each of the five group rides left on their paths between 10 and 17 mile rides, depending on their pace from the brewery. The riders on the fastest, most distanced ride for the hour left the gravel parking lot first.

Within the hour, the cyclists returned to River Saint Joe after racing the sunset to enjoy a beer, a sandwich and a conversation to close out their riding season together. The brewery, usually closed on Tuesdays, opens in a limited capacity for the riders to be able to enjoy its offerings after their rides.

According to Martin, most of the rides this year have had between 40 and 60 riders in attendance. At their most attended rides, there were upwards of 80 riders showing up to pedal for miles.

The rides span between 10 and 25 miles per hour in speed, and routes can cover as many miles in the allotted hour of ride time. In a year of COVID-19 precautions recreating responsibly outdoors was something Martin advocated for from the beginning.

Riders like Candi Wright, of Granger, Indiana, said she had stumbled across Bike Buchanan in the last year. Wright has been a cyclist for years, but had not found the right fit in ride groups after trying a few. Being able to be friendly and safely social without being overly competitive was a draw for Wright. One of the hallmarks of Martin’s vision for the group was to always have an inclusive, all-skill-level group ride, where people could bring whatever bicycle they had in any condition, and find a group to ride with.

For Martin, the last ride of the season was a cause for celebration after making it through a challenging year. Between June 16 and Oct. 27, Martin only had to cancel two due to inclement weather.

“Thank you, guys. We love you,” Martin said. “We’ll do this again next year.”