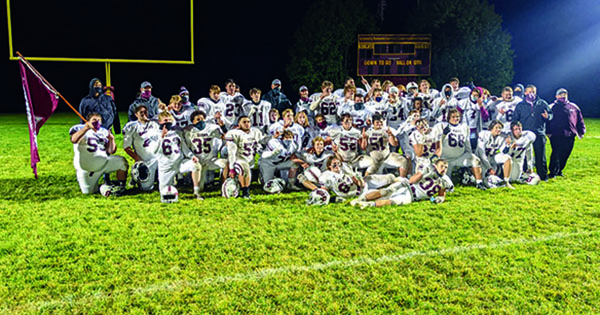 NILES — The Buchanan football team entered the 2020 season with three goals: Have a winning season, beat Brandywine, and go undefeated.

On a cold, misty evening, the Bucks overcame six turnovers to earn a 20-6 road win over the Bobcats to clinch an undefeated season for the first time since 2015.

“This is pure excitement,” said Buchanan senior Johnny Rager. “I love my teammates. They did a great job tonight. We’re 6-0.”

The win snaps a three-game losing streak in the series and gives the Bucks a 33-26 record against the Bobcats.

“This was another Brandywine Buchanan classic,” said Buchanan coach Mark Frey. “You never know what you’re going to get. They made some great plays and we didn’t take care of the ball very well tonight. Our guys kept digging and digging and came out on top. I’m so proud of our fellas.”

The game was tightly contested and was not decided until the closing minutes of the contest.

Leading 13-6 with just over four minutes remaining in the game, Buchanan quarterback Connor Legault completed a 34-yard pass to junior receiver Drew Glavin down to the Brandywine 4-yard line. After a roughing the passer penalty on Brandywine moved the Bucks up to the 2-yard line, running back Keeghan Pelley punched in a 2-yard touchdown run to seal the win.

After a scoreless first quarter, Rager raged for the Bucks. The running back scored on touchdown runs of 8 and 53 yards to put Buchanan up 13-0 in the second quarter.

With 1:50 remaining in the half, Brandywine quarterback Gabe Gouin escaped the pocket and ran into the end zone for a 26-yard touchdown for the Bobcats’ lone score of the game.

Brandywine recovered three Buchanan fumbles and intercepted Legault three times but were unable to convert those turnovers into touchdowns.

Gouin completed 10 of 22 passes for 124 yards and added 19 carries for 44 yards and one touchdown. Palmer had 72 all-purpose yards and Nate Orr caught four passes for 53 yards.

Legault completed 6 of 11 passes for 75 yards and three interceptions. Rager tallied 199 rushing yards and two touchdowns to lead the Bucks, who outgained the Bobcats 244-64 on the ground.

“Our running backs are hard-nosed runners,” Frey said. “They’re just gonna find that hole. We had an amazing performance out of our o-line and running backs.”

The Bobcats were without their starting backfield of juniors Ivory McCullough and Mauricio Calderon. The duo began their 10-day quarantines after being exposed to a classmate who tested positive for COVID-19.

“I couldn’t be more proud of the team,” said Brandywine coach Mike Nate. “The guys that played were great. We would’ve liked to have scored more than six points, but Buchanan’s got a good defense. They had a lot to do with that. We had some guys playing new positions, and we hadn’t worked on the spread much. We were just throwing guys out there and they were trying their best.”

Without its run production, the Bobcats were forced to empty the backfield and spread the field. Brandywine had some success with the spread late in the second quarter and most of the third quarter but was not able to sustain it. Buchanan’s defense sacked Gouin five times and stopped the Bobcats five times on fourth down. The Bucks have given up just 41 points through their first six games, the fewest since the 1989 outfit surrendered 40 points.

“We were hoping that we could beat them with the pass,” Nate said. “We did a little bit, but it doesn’t matter what you’re running, because they had a good defense. Gabe was doing all he could do, but we were off our game.”

Nate was impressed with his team’s defensive effort against the Bucks. Gouin led the team in tackles with 13 and forced a fumble, and Palmer added two tackles and two interceptions.

The Bobcats held the Bucks to their second-lowest scoring output of the season.

“I thought our defense played its best game in a long time and it kept us in the game,” he said. “[Buchanan] had six turnovers and those were forced. We had our opportunities but weren’t able to execute.”

Brandywine looks to use Friday’s loss as a learning experience. With both Brandywine and Buchanan landing in the same district, the Bobcats could very well see Buchanan again in the postseason. Nate said that the team’s tough schedule will help them in the playoffs.

“Our young kids that were in got good experience,” Nate said. “We can learn from this and move forward. We knew the schedule was gonna be tough this year and that’s good. I think we’re prepared to go into the playoffs. In the past, we might have won more games during the regular season but we weren’t as prepared. I think we’re heading in the right direction.”

Friday’s win gives Buchanan the No. 1 seed in the Division 6 playoffs, which begin next week. Frey looks forward to the challenge as the Bucks aim to make a postseason run.

NILES — Two things are as sure and death and taxes. The Dowagiac football team will run the football and... read more