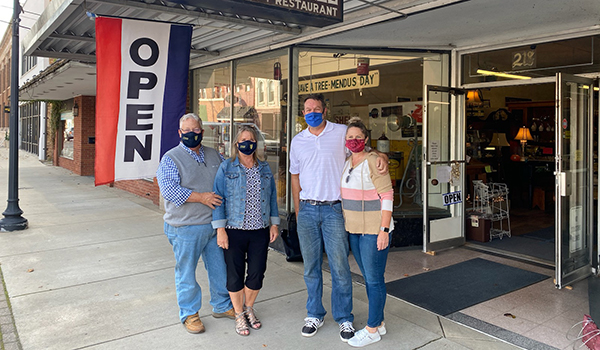 NILES — The Four Flags Antique Mall, located at 218 N. Second St., has booths full of treasures for those who seek them. Vintage wares, décor, nick-knacks, clothing and furniture line booths of the store, welcoming visitors to take the time to see as much as they can.

After 26 years of owning the Four Flags Antique Mall, located at 218 N. Second St., the keys have been handed from former-owners Jeannie and Mike Gilbert to new Niles residents Leslie and Bill Lakeman.

The Four Flags Antique Mall anchors the retail district on the north side of downtown at N. Second and Sycamore streets. The two-story building has long been a destination for those seeking a unique find, décor or a piece of history. The Lakemans plan to continue the establishment with that in mind.

“We love the building. That’s what drew us here,” Bill Lakeman said.

Since officially taking over the building on Oct. 9, Bill said he and Leslie have been busy checking through things in the building. An electrician has been on-site frequently. One of his favorite things about the building is the vintage, classic globe-shaped lights are slowly coming back to life, one row at a time.

The Lakemans plan to continue the space as an antique mall, and hope to do some restoration to the building along the way. The Gilberts had already replaced the roof and the HVAC system, so Bill said he is looking at other things to improve through the space.

The Lakemans are also retaining the business’ established staff. Friends of staff members, including Burt Sheeley, Theresa Boller, John Vogezsang and Linda Kubiak, will still see their familiar faces when visiting the mall.

Bill said that Jeannie Gilbert has been helping the Lakemans through the process of taking over the business.

“[The Gilberts] have helped us through this, and Jeannie’s been great to work with,” Lakeman said.

Lakeman said he was told by Gilbert that the Four Flags Antique Mall may be one of the oldest antique malls in the Midwest. According to Gilbert, her mother saw an antique mall in California and brought the idea back to Niles with her.

Lakeman admits it is a unique setting for an antique mall like Four Flags Antique Mall, where many establishments with vendor booths are located in pole barn structures.

“I love the idea of having the old floors, the old lights, the old windows. We like it,” Lakeman said.

Taking on an antique mall as a business is a new step for the Lakemans. Leslie is a practicing physical therapist in Cass County, while Bill is still involved in his own concrete business in Indianapolis. They own rental properties, but the antique mall is unique.

After moving to the Niles area for a business venture that fell through, Bill and Leslie decided to keep roots down in the area anyway. Bill said they have seen downtowns in cities like Niles transform, and he is excited to be a part of Niles future.

With the antique mall being a fully functioning business already, the repairs the Lakemans plan on doing in restoring the building will be going on as it is running.

CALVIN TOWNSHIP — A woman who was shot in a domestic violence incident on in Calvin Township Sunday morning is... read more