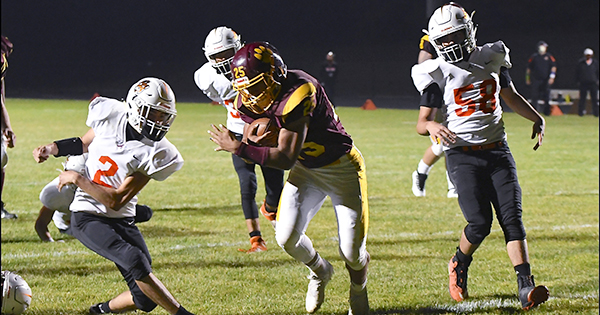 Both teams added a touchdown in the second quarter, which gave the Bobcats (3-2) a 15-14 lead at the intermission. Brandywine’s touchdown was an Ivory McCullough 3-yard run and a Bryce Taberski point-after kick.

The Shamrocks’ score was McFarland from four yards out. Berrien Springs missed the extra point.

It was all Shamrocks in the second half thanks to McFarland. Berrien Springs rolled up 30 points, while holding the Bobcats to six, on a 2-yard McCullough run. The conversion attempt failed.

McFarland scored three times, while Tyler Ewalt had a 3-yard run to complete the scoring for the Shamrocks.

Gouin led the Brandywine running attack with 82 yards on 16 carries. Anthony Calderone added 48 yards and McCullough 44. Gouin was just 2-of-5 passing for eight yards and an interception.

Brandywine returns home Friday night to face arch rival Buchanan. The Bucks are 5-0 after defeating Niles 19-0 in the first meeting between the two schools since 1981.

VICKSBURG — Cade Vota scored a pair of goals as visiting Niles defeated Vicksburg in the opening round of the... read more