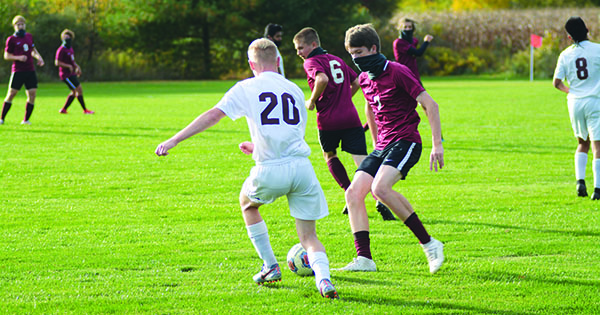 The Panthers shut down the Bucks 8-0 in Division 3 district play Wednesday at Buchanan Middle School.

The Bucks played with just 10 players after two team members were quarantined due to COVID-19 concerns.

“It was tough,” said Buchanan coach Russ Philip. “We were behind the eight ball from the beginning, but our guys didn’t quit, and I’m proud of their effort tonight.”

Brady Bornas tallied three goals for Watervliet and Brennan Bornas had two, while Abel Villarreal, Andrew Chisek and Nathan Isbrecht each had one.

“The kids came out ready to play,” said Watervliet coach Doug Bornas. “After the tough loss we had last year in the district, they didn’t want it to happen again. They played hard and they wanted to finish the game. I’m proud of them for that. They did a great job.”

Buchanan senior Jensen Ruelle made nine saves in goal for the Bucks, who end the season with a 3-6 record and a fourth-place finish in the Berrien-Cass-St. Joseph conference.

“Overall, we’re happy with the season,” Philip said. We had an excellent 3-0 start to the season but with injuries and quarantines, it all went downhill from there. The team never gave in, and I couldn’t be more proud.”

According to Philip, the team’s tenacity throughout the season’s ups and downs is what he will remember most about them.

“We don’t have a lot of subs,” Philip said. “So they play pretty much the entire game. They’re gritty and they stay positive all the time.”

Wednesday’s game was the last for seniors Ruelle, Irving Cruz and John Gartland. This season was Gartland’s time playing organized soccer and he enjoyed every minute of it.

“I had great people to play with,” Gartland said. “I couldn’t imagine a better group of guys to play with. They accepted me and made me feel like a part of the team. I enjoyed this season a lot.”

Philip said that next year’s team will feature a combination of youth and experience.

“We’ll have three or four freshmen coming from the eighth grade, and we have four or five juniors who will become seniors. That will be a good mix, and we have a lot to improve on next year.”