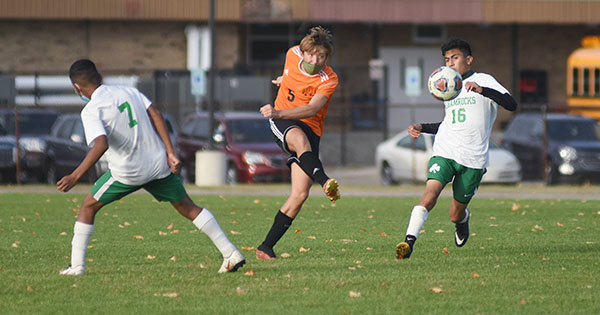 DOWAGIAC — The three-time defending Division 3 District champion Dowagiac Chieftains blew out visiting Berrien Springs in the opening round of the state tournament Wednesday.

The Chieftains (10-2-1) sent notice to the rest of the field that they were not about to give up their title without a fight.

Dowagiac scored in the opening minute, led 3-0 at halftime and then scored five goals in the final 40 minutes to end the match due to the mercy rule. The Chieftains host Coloma, a 3-0 winner over Brandywine, in the district semifinal at 4:30 p.m. Tuesday.

Veteran Dowagiac coach Mike Williams said his team played well and worked on things that they will need to do against opponents as the tournament continues.

“I thought we played really well regardless of the 8-0 score,” he said. “Pretty much everything that we did in practice we did today. It was nice to see.”

Noah Green got the Chieftains on the board first before Cole Weller and Chris Mosier added goals to make it 3-0 at the half. Alex Hernandez assisted at the final two goals of the opening 40 minutes.

The first-half score could have been bigger, but the Chieftains missed a couple of opportunities to put the ball in the back of the net.

“We did well swinging out and putting to the back of the line and finishing,” Williams said. “We were unlucky on several in the first half. The second half, we had cleaner finishes.”

In the second half, Isaac Saavedra had a pair of goals, while Green finished off his hat trick with two more scores. The final goal came off the foot of Ethan Hannapel. Jordan Simpson picked up the only assist of the second half on Green’s third goal of the night.
The Chieftains outshot the Shamrocks 25-7. Alejandro Martinez stopped all seven shots he faced.

The Bobcats’ season came to an end Wednesday night as visiting Coloma blanked the Bobcats 3-0.

After a scoreless first half, Lucian Whitaker, Devon Sawyer and Connor Hedges all scored goals for the Comets, who outshot the Bobcats 25-19.