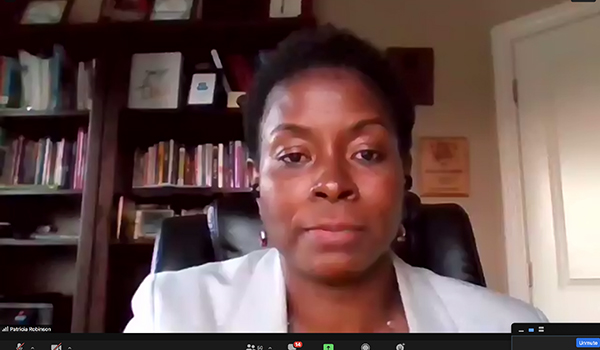 BERRIEN COUNTY — In the second of four Zoom virtual meetings organized by the Berrien County Advocates and Leaders for Police and Community Trust and Interfaith Action, local leaders came together to speak about racism, justice and education disparities.

Blood and Shabazz spoke about how the Niles administration completed the United Way’s 21-Day Equity Challenge beginning in August.

“Since then, we have had principals added to it,” Shabazz said. “I’ve had a spot in my weekly bulletin where I’ve taken pieces [from the challenge], some amazing articles, podcasts and information and shared it with the staff. That way, if they weren’t aware of the challenge, we could add something weekly and get through a lot of the year to continue the conversation.”

Shabazz said the administrative team, including Superintendent Dan Applegate, has continued the conversation about racism in schools to include topics about redlining and privilege.
Shabazz and Blood were involved in the Michigan Department of Education Racism Task Force, and mentioned that Applegate and school board president for Niles Community Schools, Dana Daniels, have been meeting with community organizations focused on equity.

“While we are providing a list of what we have done, I don’t want to give anyone the impression that I personally believe, and I think I can speak for Jennifer [Shabazz], that we don’t necessarily believe that this is enough,” Blood said. “The nature of working on anti-racism is that this might never be enough. We need to continually press and continue to work on a goal that is far away.”

Buchanan Community Schools was represented in the discussion by its new Superintendent Patricia Robinson.

Robinson spoke about being new to the Buchanan community, but she has served in various roles as an educator for 23 years.

“Buchanan made a bold step this summer in hiring their first black superintendent for the district,” Robinson said, referring to herself. “That, to me, is a commitment to honoring diversity and to really going outside the box as to what has been the traditional leadership look in the district, in hiring me.”

Robinson said she appreciated the school district and the Buchanan community for supporting her in the role. She spoke about how, while being interviewed, it was signaled to her that if she were hired into the superintendent role, she would be the first black superintendent for BCS. She was asked during the process how she would improve upon the staff makeup and make it more diverse.

“That was my cue that the district — and my community — were ready to have more diversity within the school district,” Robinson said. “That is now part of our strategic goal: recruiting a diverse group of people.”