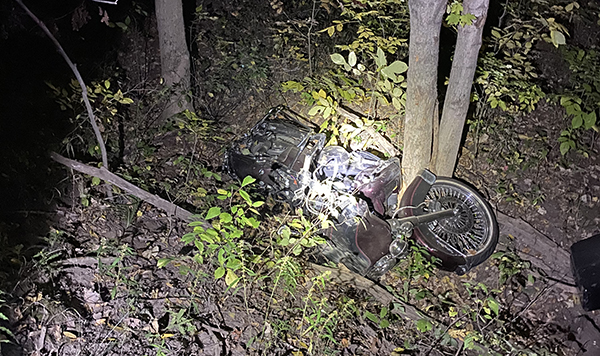 PENN TOWNSHIP — Cass County K9 Faust was called in to find the missing victim of a motorcycle crash Sunday evening, according to the Cass County Sheriff’s Department.

At 8:03 p.m. Sunday, the department was called to investigate a personal injury crash near the intersection of Dutch Settlement Road and East Street in Penn Township. Upon arriving at the scene, deputies were unable to locate the driver of the motorcycle.

Shortly after, Cass County Central Dispatch received a 911 call that a subject was walking up the driveway in the 16000 block of Marcellus Highway, but left in an unknown direction.

Faust was called in to locate the injured subject, and tracked the motorcyclist to a thick wooded area approximately a quarter-mile from the crash scene. Deputies said the driver had an obvious head injury, and was lying in the ditch.

The driver, Travis Herman, 28, of Marcellus, was traveling east on Marcellus Road when he ran off the roadway and struck several trees.

Once located, Harman was transported to South Bend Memorial Hospital by ambulance for treatment of his injuries.

Harman was wearing a helmet. Deputies said speed may have been a factor, and they are unsure if alcohol played a role in the crash.