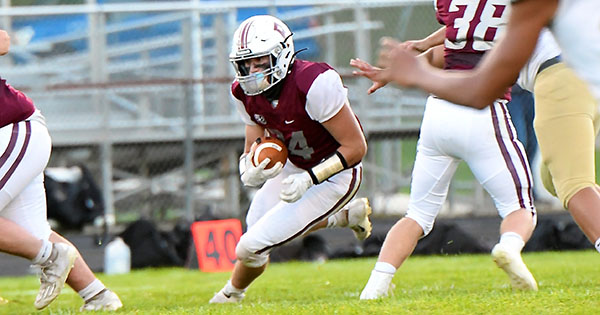 NILES – For the first time in more than three decades, Niles and Buchanan will meet on the football field.

The Vikings and Bucks have played 32 games since 1950, with Niles holding a 24-5-3 record in those contests.

Both teams will enter Friday night’s clash coming off victories. Buchanan improved to 4-0 with a 42-7 drubbing of Comstock, while Niles picked up its first win of the season against Kalamazoo Loy Norrix, 14-7.

Niles and Buchanan are looking forward to facing off, but both head coaches know that Friday night, once the ball is kicked off, is just another game in a shortened regular season and a chance for both teams to improve with the playoffs set to begin two weeks later.

“Our young men have done a great job of focusing on the now,” said Buchanan coach Mark Frey. “Niles is a big school and will have some talent that we cannot just overlook. Also, Niles being so close to us, makes this feel like a rivalry just as much as the following week, so our young men will be excited.”

Frey added that not only are the players looking forward to the matchup but so is the town.

“I feel that the team and the town are excited because it’s a close game,” he said. Not having to travel far allows us to stay pretty close to our game day routine that we have at home, which will help. Also, the game will be exciting, because many of our young men have played with or against their kids growing up, so it will feel familiar.”

Niles coach Joe Sassano was pleased to see his team finally break through and get a victory. He knows how hard they have been working on turning the corner.

“They handled it like they should,” Sassano said about the reaction to the win. “They were very happy and upbeat. I think they also know that its back to work on Monday.”

Niles does not have the same numbers as Buchanan when it comes to experience. But Sassano said his kids are starting to learn how to play the game at the varsity level.

“Our younger players are learning the game each week and growing up,” he said. “We have a lot of young players out there getting major playing time. I think our defense is growing each week and learning to make plays. I like the way they fly to the ball.”

He knows his team is looking forward to Friday night’s challenge.

“I am sure they are excited about facing Buchanan,” he said. We know we have to play good sound fundamental football with great effort from everyone.”

Last Friday night in the win over Loy Norrix, Colin Hess found the end zone twice for the Vikings.

His first run covered 42 yards, while his second score came from 7-yards out. Hess finished with 120 yards on 20 carries. Niles had 235 yards of total offense, including 230 on the ground. Julian Means-Flewellen added 74 yards on 15 carries.

For the Bucks, after losing starting quarterback Levi Zelmer against South Haven in Week 2, Buchanan regrouped and kept moving forward. Connor LeGault took over at quarterback for the Bucks and has performed well.

Some of the pressure that might have been placed on other quarterbacks who had to step in for a starter has been removed by the Buchanan running game of Keeghan Pelley and Johnny Rager. Pelley rushed for 105 yards on 12 carries and scored on touchdown runs of 41 and two yards. Rager finished with 75 yards on nine carries. He had a touchdown run of 54 yards.

The Bucks have also been stout on the defensive side of the football this season.

“We are playing well, but we have much to improve on,” Frey said. “We are happy with our run game, but we need to continue to improve in our passing game each week. Also, we will need to focus on our jobs and execute no matter what the opponent gives us.”

Kickoff is set for 7 p.m. Friday night. The game can be seen live on Niles’ NFHS Network. No general admission tickets will be sold.