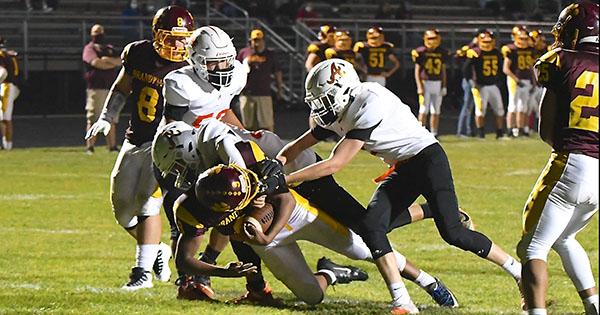 Michael Palmer scores one of his two touchdowns for Brandywine in the Bobcats’ 44-24 win over Allegan Friday night. (Leader photo/KELLY SWEENEY

NILES — For one half, visiting Allegan was able to hang with Brandywine Friday night.

But the Tigers, who were playing their final football game of the 2020 season due to a lack of numbers, were unable to keep up with the Bobcats over the final 24 minutes of their non-conference football game and ended up on the wrong end of a 44-24 decision.

It was a battle of two quarters in the opening half as Brandywine won the first 12 minutes 12-0, while Allegan won the second 12 minutes 16-8. But in the end, it was the Bobcats heading to the locker room with a 24-16 lead and all the momentum.

The Tigers (0-4) were able to cut the Bobcats’ lead to 12-8 when Josh Hansen tossed a 5-yard touchdown pass to Luke Ellis. Allegan completed the 2-point conversion to make it a four-point contest.

Following the first of two Michael Palmer touchdowns for Brandywine made it 20-8, the Tigers scored again with less than a minute to play in the first half on a Hansen to Jesse Macherzak 13-yard touchdown toss. The conversion was good, and the Tigers were within striking distance, down 20-16.

Brandywine immerged from halftime with a little more focus.

The Bobcats scored a pair of touchdowns in the third quarter and three consecutive times in the final 24 minutes to make it 44-16 before Allegan would add one last score.

Ivory McCullough opened the second-half scoring with a 13-yard scoring jaunt before Palmer picked up his second rushing touchdown, this one from 5-yards out. Jakob Luczkowski completed the scoring for the Bobcats with a 3-yard run. Brandywine was successful on all three 2-point conversions.

Hansen would cap the scoring with his third touchdown pass of the night and his second to Ellis. This one covered 48 yards with 1:56 remaining in the contest.

Brandywine rushed for 352 yards against the Tigers, led by Tweedy’s 113 yards on seven carries. Quarterback Gabe Gouin finished the night with 73 yards rushing and McCullough 64 yards. Gouin was also 2-for-4 passing for 42 yards.

Zach Anderson had 11 tackles to lead Brandywine, which also got eight tackles from Phillip McLauring and seven tackles each from Hunter Heath and Cruz Sanchez. Palmer had an interception for the Bobcats, who hit the road to face Berrien Springs Friday night.