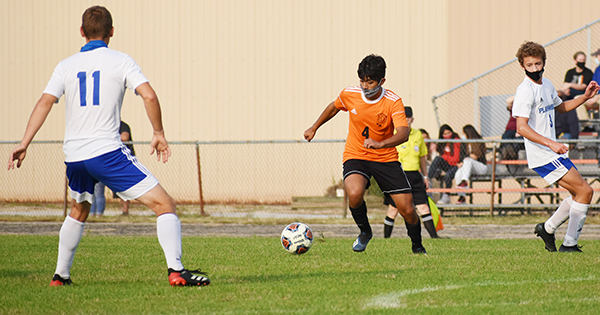 PAW PAW — Leading 3-0 at halftime, visiting Dowagiac struggled to maintain its momentum, as host Paw Paw scored a pair of goals in the final 40 minutes.

The Chieftains were able to hold off the Red Wolves for a 3-2 Wolverine Conference victory Wednesday night.

The Red Wolves took a 2-0 lead in the first half on goals by Jason Rocz and Jay Stevens.

In the second half, Ethan Hannapel cut the Paw Paw lead to 2-1 with an assist from Alex Hernandez off a corner kick before Jordan Simpson tied the match at 2-2 on an unassisted goal.

The game-winner went to Hernandez with 11:43 remaining in the match. Isaac Saavedra had the assist.

“Story of two halves again,” said Dowagiac coach Mike Williams. “Played great the first half, and moved the ball well and created opportunities. Second half, we didn’t win 50/50 balls or stay disciplined in our positions.”

The Chieftains (8-2-1) outshot the Red Wolves 19-12. Alejandro Martinez was credited with nine saves.

Dowagiac will host Parchment in a non-conference match scheduled to begin at 4 p.m. on Oct. 12.

The Rangers and Howardsville Christian played to a 3-3 tie on Tuesday.

Cassopolis and Howardsville were deadlocked at 2-2 after 40 minutes of their non-conference match. Buster Ward and Ben Gillesby had the first-half goals for the Rangers. Jaren Waldschmidt assisted on the Ward goal.

In the second half, Zachary Friske scored an unassisted goal for Cassopolis.

“Every team we have played this season has been at about our level or above us, which has given us some steep competition,” said Cassopolis coach Austin Francis. “Even with having seven seniors, we are also mixing in a lot of freshmen and a good handful of our starters didn’t start playing soccer until high school. A lot of the goals against us are simple mental errors that we have slowly been working on eliminating. The pieces are thankfully starting to fall into place and our guys are working hard. It’s been a season of growth and lots of adjustments and I’m excited to see our level of play excel as we get closer to districts.”

Jimmy Strukel had three saves for the Rangers, who faced the Kalamazoo Cougars Thursday for its Senior Night.