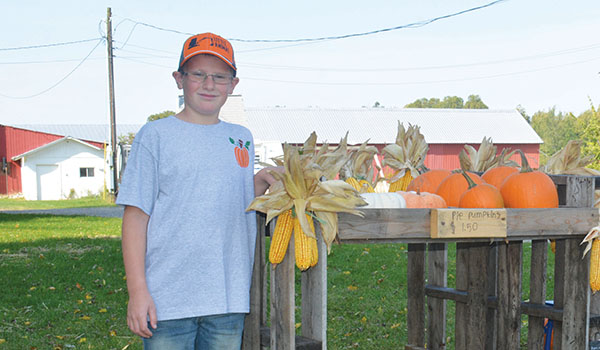 DOWAGIAC — October is a busy month for nine-year-old Mason Ausra.

The festival will feature a photo booth by Jessica Krueger Photography and fresh produce from Disterheft Farms. Candy and sweets will also be sold at the festival, as well as antiques.

“Since we have family members that sell fruits and vegetables, I thought that we could do a festival,” Mason said. “My grandma sells antiques and another relative sells candy. My aunt [Jessica Krueger] is getting into photography and took pictures of me, so we thought that she could do a photo booth.”

Mason’s Pumpkins was founded by Mason, who has been in the pumpkin growing business for three years.

According to Mason, his jack-o’-lantern pumpkins are $5, and larger pumpkins can range anywhere from $8 to $12. He pays for his own supplies, including seed and other pumpkins needed to stock his inventory. Ecklers Produce in Niles and Disterheft Farms in Eau Claire often collaborate with Mason.

“We try to support other businesses,” said Mason’s mother, Kristin Ausra. “We get our signage from Creative Vinyl Signs. We’ve worked with different farmers when we buy supplies. We try to instill a true business model for him. When we purchase from other companies, we write it up as an expense. We’re trying to teach him the concept of ‘spend money to make money’.”

To date, Mason has made approximately $5,000 in sales, which is being saved for college or a future farm business.

Kristin is happy for her son’s business success and hopes his business continues to grow.

“It is super exciting for my husband and I,” Kristin said. “I didn’t expect it to be this well-received. Having such a large family and a community that supports our youth is really inspiring for us. What we thought was going to be a small, roadside stand has really taken off and turned into a small business that he hopefully can continue through this youth and into adulthood.”

NILES — Monday was a whirlwind of a day for business owner Gary Marshall. Marshall, owner and operator of FitStop24... read more