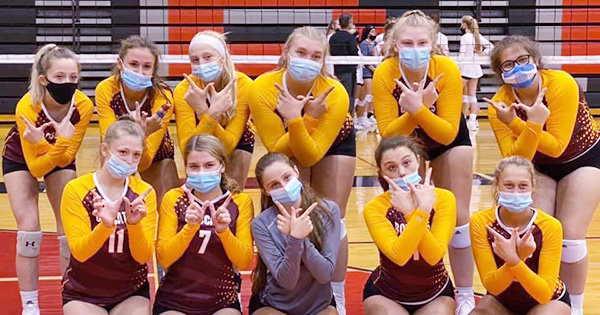 NILES — As volleyball heads into its final month of the regular season, teams are starting to tune-up for their runs at conference and division championships, as well as prepping for the upcoming state tournament.

Brandywine and Niles had a big weekend with the Bobcats going undefeated to win the Bloomingdale Quad, while Niles was 2-1 at the Bronson Quad, with a win over the defending Division 4 state runner-up host school.

The Bobcats are back on the court on Saturday at they travel to Coloma for a tournament.

“Our goal is to improve as a team each week, play bigger than the previous week, and flip the switch to beat some of the top teams in the state,” said Niles coach Jenny Nate. “We have beat some tough teams and have also had some tough, close losses against some of those top-ranked teams in the past few weeks. It’s fun to watch this team keep leveling up day after day, and I told them last week at practice that if they keep putting in the work, we are going to push through and start winning these tight matches. They did exactly that today taking down two ranked teams and dropping a tough, tight one to a strong Onsted team.”

Nate said the team will head back into the gym to prepare for its next challenge, which comes on Wednesday when they host Comstock in a BCS match. The Vikings will also host a quad on Saturday, which will include rival Edwardsburg.

The Dowagiac volleyball team had an inconsistent day going 1-1 at the Hillsdale Academy Tri on Saturday.

“It was another up and down day,” said Dowagiac coach Tony Hooley. “With a few exceptions, the ladies need to be mentally stronger when going through tough stretches, for the good of the team. There also needs to be more energy out on the court throughout the match.”

Hooley singled out the efforts of Caleigh Wimberley, Riley Stack and Jessie Hulett.

“Caleigh Wimberley had a nice day overall,” he said. “Riley Stack had her best day at the net this season, and Jessie Hulett turned in a valiant performance despite battling an injury.

Dowagiac heads to Sturgis on Thursday for a Wolverine Conference match.