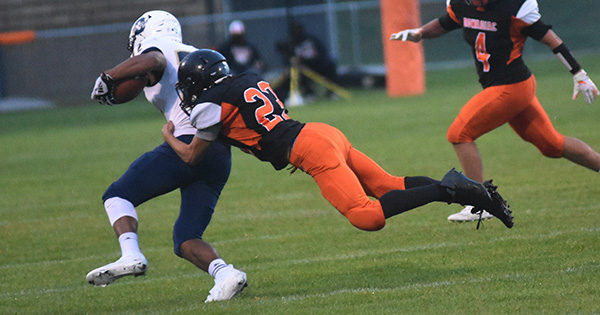 Brendan Lozano hauls down an Otsego player in the first quarter of Dowagiac’s 17-7 win over the Bulldogs Friday night. (Leader photo/SCOTT NOVAK)

Dowagiac gets defensive in 17-7 win over Otsego

DOWAGIAC — The “D” in Dowagiac has long stood for defense.

That was certainly the case Friday night at Chris Taylor-Alumni Field as the host Chieftains picked up their first win of the season. Dowagiac gave up a second-quarter touchdown to visiting Otsego in their Wolverine Conference contest and then shut down the Bulldogs pretty much the contest’s remainder.

Second-year head coach Randy Brooks has an inexperienced football team that listed just 15 seniors on its roster. The Chieftains have 10 juniors on the team, many of whom are playing varsity football for the first time. Another five are either freshmen or sophomores.

That inexperienced showed during the first two weeks when Paw Paw and Plainwell soundly defeated Dowagiac. Brooks did not let that deter him and his coaches as they vowed to get better following a 44-14 loss to the Trojans the previous week.

The Chieftains did just that, especially on the football’s defensive side where they limited Otsego to 164 yards of total offense. The Bulldogs rushed for 69 yards, while quarterback Kyle Stevens was 8-of-20 for 95 yards.

“We played four quarters,” Brooks said. “We didn’t turn the ball over and played solid defense. I thought our ‘D’ line did a good job, and it makes the reads for our linebackers a lot easier when the line gets its hands on up front. We got to the ball. Last week we were a little sluggish there. And we hit. There were some big hits out there. That is what you think of when you think of Dowagiac football.”

With the defense getting better, Brooks and his staff will have to spend more time trying to get the offense to catch up. Despite winning by 10 points, Dowagiac had just 126 yards of total offense. It all came on the ground as for the second time in three weeks, the Chieftains did not attempt a pass. For the season, Dowagiac is 0-for-1 with an interception throwing the ball.

“We were ahead, why would we want to throw it?” Brooks said.

One of the Chieftains’ sophomores is running back Malakai Haines, who has shown through the first three weeks the ability to find a crease, get into the open and break off long runs. He scored both touchdowns against the Bulldogs Friday night.

His first touchdown, a 9-yard run just 34 seconds before halftime, tied the game at 7-7. His second score, a 34-yard run, sealed the victory.

Brooks said tying the score heading into the locker room at halftime made a big difference in how his team approached the second half.

“Emotionally, we needed that,” he said. “We got down there inside the 10 and got a penalty that backed us up, and we didn’t score. There was some pressure on us there.”

Neither team scored in the opening 12 minutes.

Otsego got on the scoreboard first when Steven Drewyer connected with Ashton Atwater with an 11-yard touchdown pass.

In the third quarter, Dowagiac was able to take the lead when Nate Judd connected on a 40-yard field goal to make it 10-7. Brooks said from that point on he dialed back the aggressiveness of the offense.

“We got a little conservative on offense,” he said. “We were tied. We messed one punt, but they messed up two. We just stuck to three yards and a cloud of mud. When we got the 10-7 lead, we weren’t going to take any chances. We wanted to pound the ball right at them and take time off the clock.”

Defensively for the Chieftains, Terrance Price had 9 1/2 tackles, while Deny White added five tackles and Brendan Lozano five. Brayan Parades and Vincente Madison were both credited with four tackles.