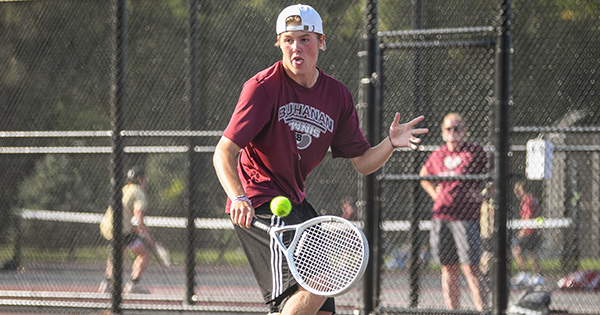 ST. JOSEPH — Due to weather conditions that ranged from thunderstorms, hail, wind and sunshine, the BCS Athletic Conference Tennis Tournament was moved indoors to the South Shore Racquet Club on Thursday.

Undefeated regular-season champion Berrien Springs captured the BCS title as it finished with 12 points compared to seven points by runner-up Brandywine. The Bobcats were also second in the regular-season standings.

Buchanan and South Haven tied for third-place in the tournament standings with six points each. The Bucks finished third in the final standings, South Haven fourth, Bridgman/New Buffalo fifth and Niles sixth.

Buchanan had a pair of flight champions, while Brandywine had champion.

Brandywine’s champion came at No. 3 doubles when Bode Bosch and Matt Veach defeated Erik Blake and Ben Cook, of Berrien Springs, 6-4 and 6-3.

“I thought we played well overall,” said Brandywine coach David Sidenbender. “We had some very good wins — Connor Tittle at No. 2 singles over South Haven, No. 4 singles Corbin Gamble over South Haven and No. 3 doubles Matt Veach and Bode Bosch, who were champions over Berrien Springs. I feel we have some good momentum heading into districts for sure.”

The Bobcats will host Edwardsburg in a non-conference match on Monday before heading to the Division 4 regional at Three Rivers Oct. 9.

SOUTHWEST MICHIGAN — A Berrien County resident has reportedly died of COVID-19 related illness, according to the Michigan Department of... read more