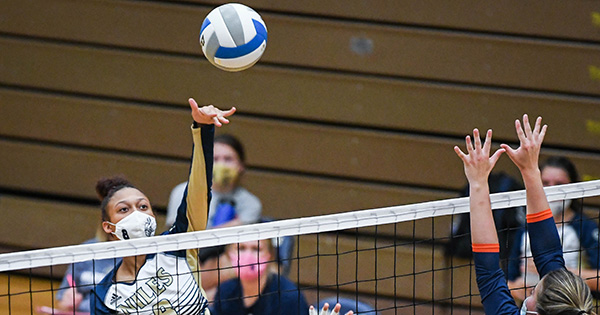 Amara Palmer had a team-high 26 kills on Saturday for Niles. (Leader photo/EMILY SOBECKI)

Originally, Division 4 defending state champion Bronson was supposed to participate in the quad. Schoolcraft replaced Bronson when it canceled. Niles will travel to Bronson Saturday for a tournament.

“When I set up this quad last year, we knew we wanted it to be a ‘powerhouse quad’ that would make us play tough competition and really step up our level of play.” said Niles coach Jenny Nate. “Schoolcraft is ranked No. 2 (Division 3) and Portage Northern was coming in at 7-0 after being Portage Central in three sets and going five sets with Mattawan a few nights ago.”

Nate always wants her teams to compete against the best competition possible. On Saturday, she wanted them to see teams that play fast and aggressive.

“Both teams have strong teams and a fast middle offense,” she said. “When we play these teams, we are forced to speed up every aspect of our game, play smarter, and adjust quickly. I want my team to step on the court every day, knowing they can compete with and beat these top teams in the state. And the only way we are able to do that is by continuously making sure we play them — even if that means our record might take a hit. I was pleased with the scores today and know that we are making improvements each week; we were right there in various sets.”

Nate said that there a lot of positives that the Vikings took away from Saturday as they now set their sights on the BCS Athletic Conference showdown against host Brandywine on Wednesday. Both teams enter the match undefeated in league play.

“They all give their best effort, and I know they will head into next week even better and tougher and ready to prepare for another BCS Conference match Wednesday against Brandywine.”

Complete statistics can be found in the Daily Data section online at leaderpub.com.