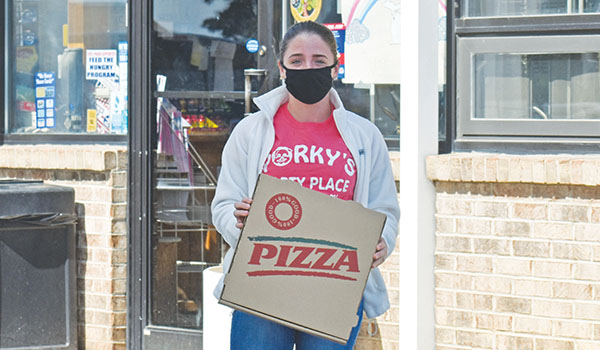 CASSOPOLIS — Cass County diners may be met with the face of a furry friend when they open their pizza boxes, thanks to a new project launched by a Cassopolis teen.

Kaitlyn Hartsell, a 19-year-old Southwestern Michigan College student and reigning Miss Cassopolis, recently partnered with her workplace, Porky’s Party Place, and Cass County Animal Control to place flyers for adoptable animals inside Porky’s pizza boxes. Customers that order a pizza will receive one flyer featuring the photo and description of a currently adoptable animal per order.

“Every week, [Cass County Animal Control] will be emailing me adoption forms, and every time a pizza order goes out here at Porky’s, we will be putting an adoption form with the order,” said Hartsell, sitting in a back booth at Porky’s. “We want to promote and get some of those animals adopted because the animal shelter is very overwhelmed right now. I want to get their name out there and Porky’s name out there. I’m very excited about that.”

Hartsell, along with other Miss Cassopolis Court members, has volunteered in the past at Cass County Animal Control. She said she got the idea to facilitate the adoption flyer promotion while volunteering at the shelter and seeing the need.

“I just thought, ‘what a way to get their name out, and help promote our businesses in Cass,’” Hartsell said. “I just love any animals. I’m a big animal lover for sure. I just love to give back to them.”

Cass County Animal Control Director Ron Butts said when Hartsell brought the idea to the shelter, he and his staff were excited.

“We thought this was a great way to promote more of our animals that are available for adoption,” Butts said. “With how this whole year has been, we have had to think outside of the box. In this case, it’s outside of the pizza box.”

As the project got off the ground this week, Butts said he was happy to see community involvement and passion from teens such as Hartsell.

“It’s really great to see the interest,” he said. “To see the younger generation step up and take on that responsibility, it’s great. It shows that there is hope down the road.”

Hartsell said working with the staff at Cass County Animal Control has helped the project get off the ground with ease.

“Everyone there is so great,” she said. “There is such positive energy there.”

As she begins placing flyers in pizza boxes this week, Hartsell said she hopes many animals will find forever homes through the project.

“I’d love to keep this going as long as we can,” she said.