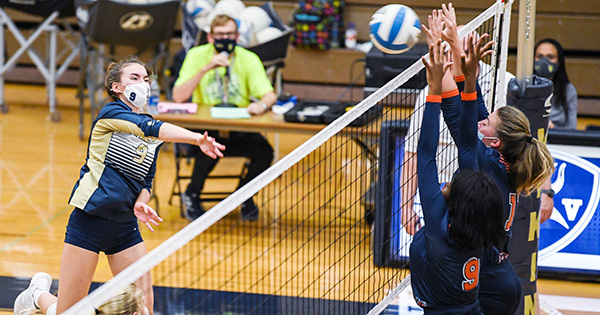 NILES — The Niles girls volleyball team took care of business against Bridgman on their home court.

Niles used a 10-2 start to take control of the first set. In set two, Bridgman took an early 5-4 lead before the Vikings ended the set on a 21-5 run.

The third set was close early on. With the set tied 6-6, a Laura Golubski kill sparked an 8-1 Vikings run that allowed them to seal the deal.

“I think, they played great,” said Niles head coach Jenny Nate. “It was a total team effort. We made sure that our scoring was balanced. We told our setters to give everyone the ball. Our defense did their job. The serves were in. We communicated, and we did a great job kind of shutting down their hitters a little bit. Even with the block deflections, someone was always there to pick up the ball. We were very scrappy and determined, and that was our goal today was coming in.”

Nate was impressed with the way the team overcame slow starts in sets two and three.

“They were very calm and collected,” she said. “They definitely took what we worked on in practice and transferred it here. We do a lot of pressure in practice and go over scenarios where things are on the line, so they’re able to stay kind of calm and cool when the real deal is happening because that’s what they practice every day. So it was nice to see that. Every girl on the team played, and every girl on the team contributed, no matter who was on the court. That’s the way it should be on a good team.”

“We came out strong,” he said. “But Niles is very strong and very athletic. They’ve got great size. They’re a good team.”

According to Nate, this year’s team is young but features plenty of talent.

“We’re a mix of a little bit of every grade,” she said. “We’ve got four seniors, two freshmen, a huge group of sophomores and some juniors. I have a freshman starting, a sophomore starting, and I’ve got a couple of juniors and seniors starting.”

Even with the diverse grade levels, Nate said the team has great chemistry.

“These girls are such good teammates to each other,” she said. “They have so much energy. They’re so positive, and that transfers into how they play. I mean, when you’ve got girls getting it done in the classroom, in the community and taking care of each other and being respectful, good things happen.”

With a conference win in hand and another game’s worth of experience for an up and coming team, the Vikings are preparing for a potential postseason run.

“The talent’s there, for sure,” Nate said. “We keep playing the toughest competition we can play, and that’s what gets us prepared. Our record may not look great. We go against the biggest and the best teams so that we can improve. No matter what, our goals are to be able to play the highest level and to make sure we maintain that tempo no matter who applies. ‘Niles ball’ at all times — that’s our goal and that’s what they accomplished tonight.”

NILES — The Brandywine soccer team used a pair of goals from Clayton Adams to edge host Bridgman 3-2 in... read more