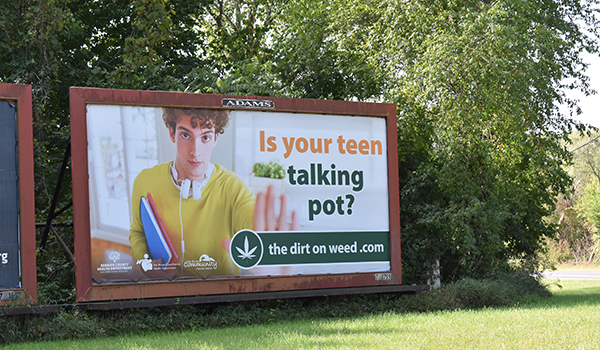 NILES — The Berrien County Health Department is no stranger to having blunt talks about public health.

Through the spring, summer and now entering fall, the most prominent information coming from the Berrien County Health Department has addressed COVID-19 pandemic safety protocols, mandates, numbers and impacts. Continuing through this time, the health department has also been lighting up its marijuana education campaign: “The Dirt on Weed.”

With topic titles like “It’s not hazy. Pot affects babies,” “Is your teen talking pot? Have a blunt conversation,” and “Keep your stash safe from little hands,” the campaign’s purpose is to educate residents on safe marijuana use and storage.

The information from the campaign is linked from the Berrien County Health Department’s website. The health department has also worked to get a televised commercial and billboards, and worked with local marijuana dispensaries to put informational pamphlets inside the establishments.

Conrad said some of the information is a way to start conversations with youth and teenagers who might be curious about marijuana use.

“We know that marijuana is legal if you are over the age of 21, but not for minors,” Conrad said. “Marijuana can significantly impact brain development, especially for people who under the age of 21.”

Another audience the campaign seeks to communicate with are pregnant and nursing mothers. Conrad said the health department had heard reports of new mothers using marijuana to lessen nausea and increase appetite.

“That is not recommended,” Conrad said. “We know that there are still a lot of studies underway about what the impact [marijuana] can have on a developing fetus. The point remains that we do know that marijuana can pass through a mother, either by smoking or ingesting that THC, and it can get the blood stream and affect the developing fetus.”

The campaign seeks to impart the known facts about the effects of use on the body, but also highlights the lack of research, as marijuana has only recently become legal in certain states across the U.S.

“You can’t actually study things that are illegal, legally,” Conrad said. “There’s still a lot that needs to be studied with that.”

Until more is known, the health department advises taking a break from marijuana and THC use while pregnant and breastfeeding.

One of the last targets of the campaign is for adults who legally use and possess recreational and medical marijuana. The health department’s material from the campaign will help legal users secure their marijuana and THC products in a way that will keep them from getting into the hands of children and underage users.

“It’s about locking it up and keeping it safe,” Conrad said.

With certain products, like THC gummies and edibles, looking like candy, or paraphernalia that can become dangerous, like smoking apparatuses and lighters, the message is to secure the products away so that they do not become a danger to the young and curious.

“There have been cases of kids who have been hospitalized and really gone into the psychoactive reaction that they had has been severe enough to land them in the hospital and in the emergency room,” Conrad said of children finding edible products.