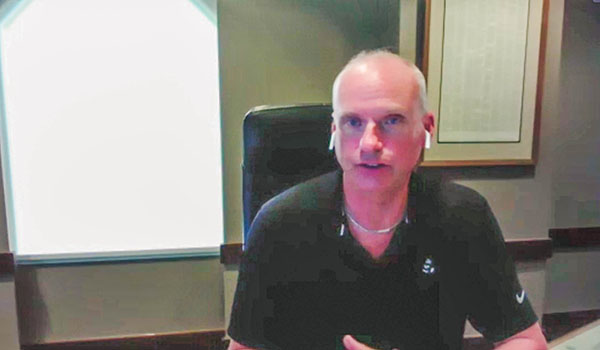 NILES — The Niles Police Chief will now be taking on an even larger role in the city, as he prepares to bridge two positions.

The Niles City Council hosted its regular meeting Monday over both the Zoom and call-in platform it has utilized since mandates on gathering sizes began in March.

During the meeting, city council members unanimously approved the establishment of a temporary administration position of public safety director, and appointed Niles Police Chief Jim Millin to the position.

Fire Chief Larry Lamb is set to retire Oct. 1, and the attrition plan to put a new fire chief in place will not be able to proceed as planned, due to budget cuts related to the COVID-19 pandemic.

Council member John DiCostanzo asked how temporary the position would be, or if the appointment was a trial for a permanent change.

“If approved, Chief Millin has been in discussion about possible retirement in February,” Huff said. “This creates an opportunity to explore this and to see how well it works for the city and how it may work for Chief Millin. If it works well for both of us, it could become a more permanent situation if he decides he might like to delay his retirement.”

Huff also said it was a good move for the city, as it would combine positions and save the city money.

Council member Travis Timm asked if there had been any concerns raised about stretching Millin too thin.

“Do we have a concern for this? Are we looking for more help?” he asked.

Huff said it will likely be a challenge in the beginning for Millin.

“To be very direct about it, we have been spreading personnel too thin for probably 20 years,” Huff said.

Huff said the Niles fire and police departments had strong second in commands in place.

“They’re very capable of stepping up and managing more of the day to day functions of the departments, while Chief Millin, in the new administrative role, will be taking on more administrative functions.”

Council member Gretchen Bertschy, before she cast her vote for establishing the position of public safety director, said she felt comfortable with the position due to who was set to be appointed.

“I truly appreciate the broad shoulders of Chief Millin,” Bertschy said. “I have a lot of respect for him. I also feel he wouldn’t make himself available for this position if he did not feel like he could handle it. He is a humble person, and he probably doesn’t know how high a regard some people have for him. Chief Millin, you’re the reason I feel comfortable with this.”