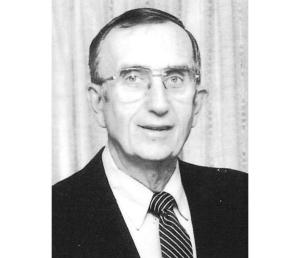 Jim grew up in Niles, except for four years, in which he lived in Buchanan.

He graduated from Buchanan High School in 1944, where he played football and basketball. During WWII, he served in the U.S. Navy, spending 14 months in the Pacific with his tour of duty taking him to Pearl Harbor, the Philippines and Japan.

He attended Michigan State University and graduated in 1950, with a bachelor of science in Food Technology.

In 1967, Jim received his master’s in education from Sam Houston State College in Huntsville, Texas.

On June 14, 1952, he married the former Sarah Hamilton in Jackson, Michigan. This union was blessed with three children; Valerie in 1954, Jerry in 1956, and Philip in 1958. Jim was a loving and devoted husband and father.

After college, Jim spent two years working for Kraft Foods at their research center in Chicago. They moved to Niles to raise their family, where he spent 10 years running Anderson’s Grocery. He later went into teaching, he taught for a total of 25 years at Brandywine Community Schools, where he was a junior high math teacher. During that time, he coached boys’ and girls’ basketball. He loved teaching, and he really enjoyed his students.

Jim was active in bowling at White’s and enjoyed playing golf at Hampshire and Juday Creek. Later in life, he greatly enjoyed reading and working puzzles. He and his daughter had an ongoing daily competition that he relished.

Memorial contributions in his memory may be directed to the American Heart Association.

He was preceded in death by his parents; his wife, Sarah “Sally” Anderson; brother, J. Louis (Eve) Anderson; and sister, Winifred (Burt) Burton.

In keeping with his wishes, cremation has taken place, and he will be laid to rest at Calvary Cemetery with a private family service, at a later date.

Condolences, photos, and memories can be left for Jims’ family at BrownFuneralHomeNiles.com.

Duane Coons, 49, of Berrien Springs, passed away Monday, Sept. 14, 2020, in his home. Arrangements are pending and entrusted... read more