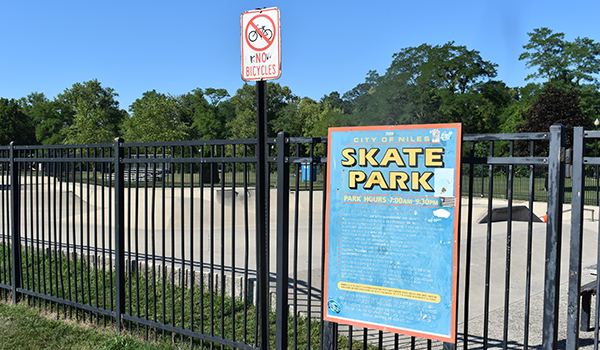 NILES — After over an hour of discussion, Niles City Council members and city officials reached no proposed solution for ongoing challenges at the city’s skatepark and Riverfront Park.

A committee of the whole meeting was called to allow members and the public to discuss graffiti, alleged fighting and the appearance of Riverfront Park and the skatepark in Niles.

The skatepark has been experiencing an increase in graffiti and fights, according to city officials. The city council also wanted to discuss concerns about the city parks conditions, and the homeless persons witnessed inhabiting the parks.

Niles resident Heidi Moore spoke about the skatepark during citizen participation, voicing her support of the skatepark, gratitude toward the city workers working to keep it open and offering her support and help in keeping it open. She did voice concern about the homeless people that spend time in Riverfront Park.

“I am very concerned with the fact that they are always fighting with each other verbally and physically, as well as using the bathroom in public and not using the outhouses that are available,” Moore said.

During the meeting, Joe Ray, director of public works, discussed some of the challenges facing the city financially when issues arise within the parks. The skatepark is just one part of the city’s park system.

Ray said even the seemingly smallest hiccup can create a large impact in the limited budget.

According to Ray, the city owns and operates about 250 acres of parks. Eighty-two acres of the parks require being mowed, which alone is a large expense out of the city’s park budget.

Ray said the current park budget for the city is about $155,000, with $24,000 that is allocated for Tyler Field. $82,000 of that budget goes to mowing the acreage of the city’s parks, leaving little to care for problems at the skatepark.

According to Huff, the skatepark was nearly a $500,000 investment when it was built.

“When I was a young lad, I was a skater and was on the JC Penney skateboard team,” Huff said. “The skate park is near and dear to me. I appreciate what it is. Damage and destruction there drives me crazy.”

The idea of installing cameras to monitor the skatepark was brought up and discussed by Huff and council members.

One drawback with cameras discussed was the difficulty in identifying people from the angles the cameras would need to be installed. Having someone monitor the footage was another concern Huff had.

Later in the meeting, the increasingly visible homeless population spending time at Riverfront Park was brought up as another challenge the city was hoping to address.

Community Development Director Sanya Vitale said there were multiple things to consider with the challenges facing both the city and perceived homeless people.

“We have a couple of things at play in Niles,” Vitale said. “In any community you work in, you see chronic homelessness. You see situational homelessness, and you see rampant poverty.”

Vitale said the city is working to find ways to help keep people in their homes, using money it has received from the Coronavirus Aid, Relief and Economic Security Act. Vitale is also the chair for the Niles Housing Commission. She said the city has begun to speak with the organizers at the Ferry Street Resource Center to find ways to feed and help with the chronically homeless individuals in Niles.

Police Chief Jim Millin said Niles police deputies have been called down to the park to arrest people for fighting in the parks, sometimes members of the homeless population, and said the arrest does not alter the behavior. Those in poverty cannot pay fines or court fees, Millin said.

“These are very minor offenses in the court, likely the judge just releases them,” Millin said. “When they don’t make their court dates, that is what gets them arrested and put in jail for up to 60 days. It’s a revolving door that does not get us ahead.”
By the end of the meeting, no solutions had been proposed to help curb vandalism and fighting near the skatepark. Huff said it sounded like there needed to be more time to discuss and research solutions.

“It is a big concern and we care very much about it,” Shelton said. “We do take it very seriously and are working hard to find solutions. If you do have feedback, please send it to us via email or phone call.”