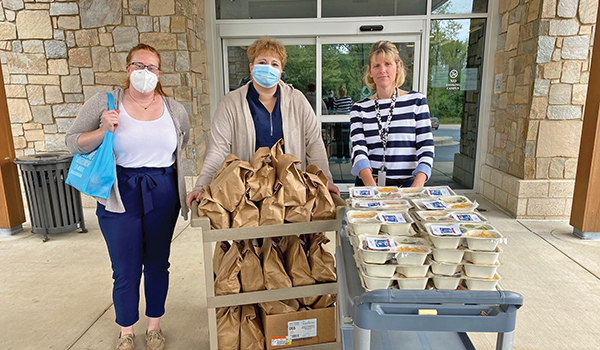 CASSOPOLIS — One local organization was able to say “thank you” to those who keep the community safe and healthy this week.

The Cass County Council on Aging hosted a free luncheon for first responders Wednesday. In total, the COA served nearly 300 meals to first responders. Some first responders were served at the COA’s Lowe Center, while COA employees delivered others their meals to their places of employment.

“We saw people doing similar things in other places, so we thought it would be a good idea to do it here,” Hoger said. “It’s a way for us to say thank you to our local first responders and emergency services.”

Inside the COA Wednesday, area police and firefighters said they were grateful for the meal. However, more than just the food, the first responders were thankful for the community’s support.

“This is great,” said Cassopolis Police Chief Brian LaValle. “Especially with the climate nowadays and some of the anti-law enforcement sentiment in our country, we appreciate this. Cass County and Cassopolis are very fortunate to have so much community support.”

Officer Donald Obermesik agreed, saying that the Cass County community and the COA have always supported its local first responders.

“[The COA] supports us all year long,” he said. “This [meal] is a ‘thank you’ to us, but I think they need to be given the props for being supportive and showing it.”

Before the luncheon was through, Hoger said she was glad the COA could give back to its first responders.

“It’s great to see everyone here,” she said.