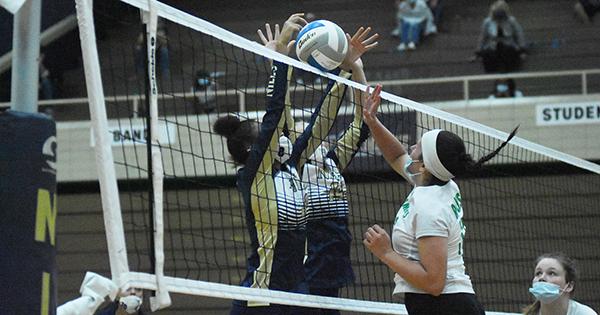 NILES — For the second time this season, the Niles varsity volleyball team went from practicing on the sand to playing in a gym Wednesday night.

Veteran Niles coach Jenny Nate was pleased with the way her team has responded to switching back and forth.

“The Niles varsity volleyball team walked right off the sand court less than 24 hours ago and right on to the indoor court, masks on, to host and sweep Berrien Springs in its first BCS Conference match of the season, and their first official day allowed in their own gym,” she said. “We knew we would have a lot of adjustments to make switching from playing in the sand to indoor.”

Nate was able to play all 15 members of her roster against Berrien Springs. She could do that because of the effort her squad has put into preparing for the season.

Jillian Bruckner had a big night for the Vikings with a team-high 10 kills, two service points and a block. Marika Ruppart added eight kills and two blocks, while Cadence Knight finished with four points, an ace and a team-high 12 digs.

Anna Johnson led Niles with nine points and two aces, while Emma Beckman had a team-high 11 assists to go along with 10 digs.

Niles is back in action on Saturday as it heads to Otsego for a quad.