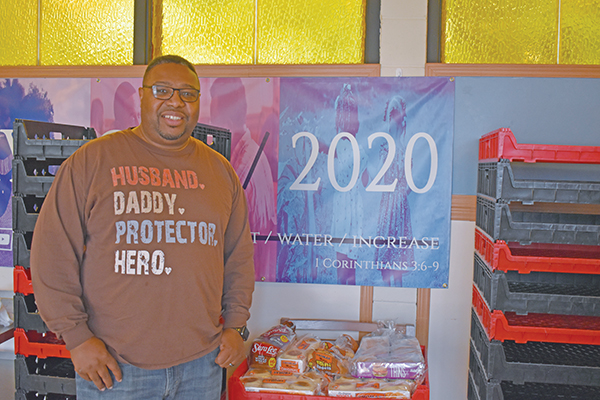 NILES — Pastor Bryant Bacon noticed an increase of homeless people in the Niles community. He has noticed it around the city, but it has also come to his church’s front door.

To help combat the problem, Mount Calvary Church, 601 Ferry St., will be offering free sack meals with sandwiches at 4 p.m, Tuesday afternoons and 2 p.m., Saturdays. The church is offering these meals to anyone in the community.

The meal offerings are beginning as Bacon and his church wanted to do something for the people in need they saw around the city.

He is used to people taking refuge in the church’s entryway during rain, but he also found people living in a van Mount Calvary Church’s parking lot.

“You have people coming into the stoop areas to come out of the elements and out of the cold,” Bacon said. “This is a whole lot bigger than what people were saying it was.”

Bacon said he thought there looked like an increase in the homeless population.

While Bacon cannot house these people, he and his congregation wanted to do something else: they wanted to feed them.

“Probably about a month or so ago, I noticed more people,” Bacon said. “I saw the same people sleeping on the sidewalks. It became apparent to me that we would see people walking certain places, but they didn’t really have anywhere to go.”

He said he and his 7-year-old son decided to take the homeless people they saw a meal one evening. They stopped at McDonalds and Little Caesars, bought some food and shared it with the people they saw on the streets.

“That’s kind of what pushed the idea,” Bacon said.

He went on to speak with a deacon and a couple, including one of the church’s ministers. Bacon said church member Mike Goodlow is taking the lead in putting together the meal efforts.

Everything going into the meals is donated to the church.

“We have an organization that donates free bread products,” Bacon said. “Some of the bread was being used to help an organization in South Bend to make sandwiches for the homeless. So, we get this bread. We have this for free. Let’s try to do something in our own city.”

The sack meals on Tuesdays came about as a way for the church to provide dinner for anyone who wants one, but also for students who have returned to school and may not have much food at home.

Another conversation with some of the homeless population inspired the Saturday meal offerings, as Bacon was told it is one of the days where less assistance is available to those in need.

“We may not have anywhere to put them or house [people],” Bacon said. “But they still have to eat.”