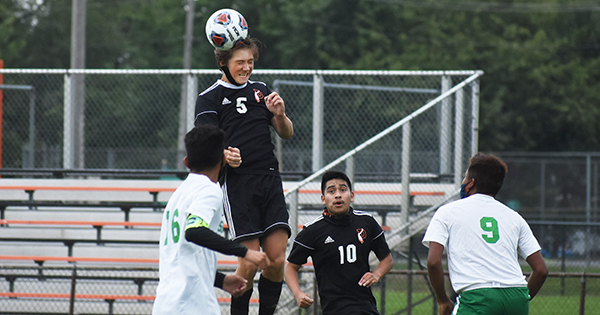 Cole Weller had a hat trick in the season opener for the Dowagiac soccer team on Tuesday. (Leader photo/SCOTT NOVAK)

DOWAGIAC — For veteran Dowagiac coach Mike Williams, Tuesday’s 7-0 win over visiting Berrien Springs seemed as if it would never come.

Williams was beginning to believe that the Michigan High School Athletic Association would move soccer to the spring like it originally announced it was doing with football.

But last Friday, the MHSAA announced that boys soccer and volleyball could begin competition after nearly a month of practicing. It also announced that football was going to be played in the fall instead of starting in March.

Just seeing his team on the pitch was inspiring to Williams and his team. The players responded by scoring three first-half goals en route to the easy victory.

“I didn’t actually think we were going to get the season going this year,” he said. “I thought it would be eventually canceled and rescheduled for the spring because it had already been so long.”

Williams said that the Chieftains had to cancel 11 matches prior to adding Berrien Springs onto the Friday schedule. Dowagiac was supposed to play in two tournaments, including its own Chieftain Invitational, and had five matches postponed or canceled. He is hoping some of those matches can be rescheduled.

Dowagiac had one player with a hat trick and two others score two goals each against the Shamrocks Tuesday night.

Isaac Saavedra scored his two goals in the 33rd and 41st minutes, while Gustavo Cruz found the net’s back in the 45th and 65th minutes.

Dowagiac outshot Berrien Springs 22-4. Goalkeeper Alejandro Martinez had one save.

Williams was pleased overall with his team’s play, but knows there is plenty of work to do now that the Chieftains have played a match. He realizes that some of the things his team needs to work on are products of not having done anything but practice.

“Our movement is not as quick as it needs to be,” he said. “We have the movement, but we’re putting the ball back into pressure. At different times, you can see it, and that is when we lose the ball. We are not swinging as good as we can, and that is just because we haven’t done it live with that much pressure on us.”