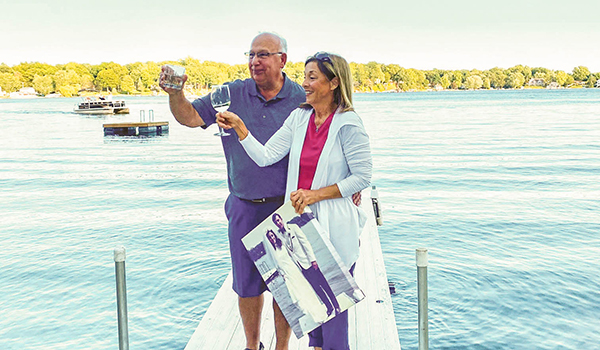 SISTER LAKES — Crooked Lake has long been near and dear to Bill and Priscilla Boston’s hearts.

After getting married on the lake in 1970, it was only right that they celebrate their 50th wedding anniversary there. What they did not know was that the Crooked Lake community would be celebrating with them.

In a plan orchestrated by their children, the Bostons were taken on two celebratory laps around Crooked Lake in the family pontoon boat on Saturday night. While making their way around the lake, they were met by several lakefront residents standing on their piers, waving and holding signs congratulating them on their anniversary.

“They didn’t explain anything to us,” Priscilla said. “They said go upstairs at 5:30 p.m. and be ready to come down at 6 p.m. The phone rang, and they said to ‘come down to the pier and bring your cocktails.’ They picked us up on the pontoon boat and drove us around, and we saw all the signs. I don’t know how they managed to pull this all off.”

Both Bill and Priscilla were overcome with emotions during the experience.

“We have very long ties to Sister Lakes,” Bill said. “I mean, we’re talking generations, now. Not just ourselves.”

“We’ve been on this property since 1976,” Priscilla said. “We know a lot of people on the lake, but there are people that we don’t know. I cried three-fourths of the way around the lake because I was so moved by seeing all of these people that cared. People that seemed so genuinely happy that we’ve been married 50 years. In a day and age where marriage doesn’t seem to be as important, you know, we were moved to see all these people celebrating us.”

The couple first met while attending Northern Illinois University in the late 1960s. After graduating, the couple was wed at Sacred Heart of Mary Catholic Church, 51841 Leach Road, Dowagiac in 1970. The wedding reception was hosted just six houses down from their current address on Crooked Lake.

With four children and 14 grandchildren, the family’s ties to the lake span generations.

“Thirteen cottages here house relatives of ours,” Priscilla said. “Twenty-three cottages in the area are relatives. We have a lot of connections with relatives right here, so it’s always a wonderful, loving place to be. My parents and grandparents are buried in the local cemetery, so it’s really a full circle of life over here.”

The couple appreciated being able to spend time with their children and grandchildren on their special day.

“With COVID and all of the challenges that we have with it, you know, it’s just wonderful that my family can be here and share this time together,” Bill said. “It’s special to us, and it means a lot.”

SOUTHWEST MICHIGAN — Because its annual celebration of community contributions, originally planned for March, was canceled due to the pandemic,... read more