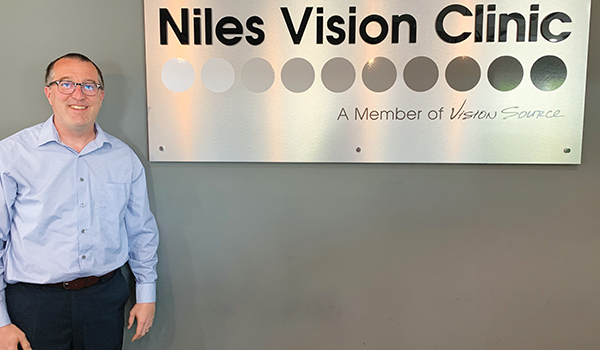 NILES — Dr. Jeffrey Becraft was just 25 years old when he began his career as an optometrist at Niles Vision Clinic in 2000.

When Becraft was still a teenager, he set his sights on becoming an optometrist partially due to his own experiences: his eye doctor was the only one he enjoyed visiting.

Being able to work directly with people attracted him to the profession as well, allowing him to both help monitor patients’ health, but do it in a friendly, personable manner as well.
“It was a life science. I like people,” Becraft said. “I think it was with a guidance counselor in high school where we sat down and figured out where those two meet.”

He figured if he did not like the profession, he could always use his science credits and steer his career toward education instead.

Instead, he went full steam ahead, graduating from the Michigan College of Optometry at Ferris State University. He did clinical rotations at Johns Hopkins Wilmer Eye Institute, in addition to the Fort Wayne Veterans Administration Hospital and the Saginaw Special Needs Vision Clinic. He also completed a residency at the Birmingham Veterans Administration Hospital in Alabama. After, he came home to Michigan and joined the Niles Vision Clinic with its then owner and lead optometrist Dr. Michel Listenberger.

“I like the Midwest,” Becraft said. “I wanted to be close to home. Niles is a great location. It’s close enough to Chicago and South Bend, and we have the beaches. We just have so much close by, and being close to home was a big factor with my family.”

Through his 20 years as an optometrist at the clinic in Niles, Becraft said the clinic has grown, along with the technology available to him and his staff to care for patients.

“We went from 1,100 square feet to our current location,” he said. “We have just over 3,000 square feet. It has given us the opportunity to take care of more people.”

In 2010, Becraft closed the sale of the business with Listenberger. Becraft became the sole owner of the practice.

“When I first started, it was three employees and two doctors. There was only a one doctor schedule,” Becraft said. “We split a one-doctor-a-day schedule.”

Today, the clinic has nine employees and three optometrists.

Outside of the business, technology has changed the profession. Becraft said the technology to diagnose eye diseases has changed quite a bit in 20 years. The refraction machine, which many patients will remember looking through and choosing between two lenses until they are able to see clearly, has been changed.

“We now have a digital refraction that basically dials it all up for me,” Becraft said.

He recalled a moment in his career where optometry took on a new level of urgency for one patient. Whereas many think of vision care as simply updating their glasses prescription, Becraft said there is more to it.

“I had a patient where you could see the blood vessels inside of the eye. It was a little concerning,” he said. “We called his doctor, and we caught a blockage in his heart artery. We could see the symptoms of the heart condition in his eye.”

As COVID-19 has presented unique challenges to optometrists, his vision for eye care has not waivered.

“I think about the future and see what we’ve done in the past,” Becraft said. “We try to get people in here who are friendly, caring and take care of people.”