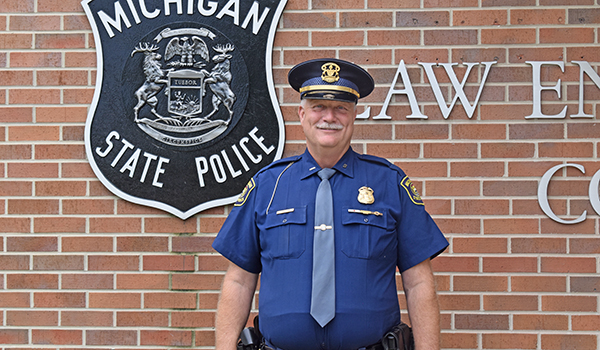 NILES — After 31 years, First Lieutenant and Post Commander Michael Dawson, of the Michigan State Police Niles Post #53, will be turning in his badge to the state.

Sitting in a board room, Dawson reflected fondly on his career through the years. He remembered what led him to the job and how, in spite of challenges presented throughout the year, he would still support his own sons’ decisions to become police officers.

On Aug. 31, Dawson will drive to Lansing to officially retire from the state police force. He passed his 31st anniversary on Aug. 20.

Originally from Grand Rapids, Dawson came to the Niles post when he was hired by the department.

He has lived in Niles since 1989, when he began as a MSP trooper at post #53. In 2003, Dawson was promoted to sergeant at the post, and then in March 2013, he was promoted to first lieutenant and post commander.

“I have been told that I am the only person in the department who has been a trooper, sergeant and post commander at the same post without ever transferring away,” he said.

Dawson said he has heard of other officers who transfer to another post, and transfer back to their original post as a sergeant. The promotion through the ranks at a single post remains rare, he said.

Before coming to work in Niles, Dawson had visited prior to relocating for his job at the MSP Niles Post #53.

“I actually have a cousin who lived in Niles,” Dawson said. “My wife is from Niles. It’s a good place to raise kids and have a career.”

He graduated from the Grand Valley Police Academy, and went searching for a job after graduating. He was hired by the MSP and went through their academy to the 106th Recruit School.

For 25 of his 31 years with the MSP, Dawson worked as a crash investigator.

“People say you’ll never use math after high school, but you do a lot of math as a crash investigator,” he said. “It’s a lot easier now with computers, but I’ve always loved trying to figure out what happened at crashes.”

He said the unfortunate part is that often, investigators are only called out to a scene when someone has been seriously injured or killed. He would try to piece together the scene to find out what could be done differently.

“I’ve always been really intrigued with who did what wrong and how you could prevent something in the future,” he said.

Dawson said his last year on the force had been an interesting one.

“With COVID-19, everybody has to take extra precautions. You have to be cautious,” he said.

He said when he and officers are working with someone, they have to make sure they are not getting too close to someone’s face, especially if they are exhibiting symptoms of illness or COVID-19.

“It’s been a very unusual year,” he said. “Then, you throw in the incident in Minnesota which sprouted protests around the country. There is a lot of anger toward law enforcement.”

The incident in Minnesota Dawson referenced occurred on May 25, when George Floyd was killed in Minneapolis during an arrest. Floyd, a 46-year-old African American man, was alleged to have used a counterfeit bill. A Minneapolis Police Department officer, Derek Chauvin, had Floyd laying handcuffed, face down on the street while he knelt on his neck for nearly eight minutes. Floyd lost consciousness and died from the interaction. Chauvin has been charged with third-degree murder and second-degree manslaughter. Protests erupted around the country after the incident.

“We’re not out here to hurt people,” Dawson said. “You don’t become a police officer in the first place if that what you wanted to do. We’ve had stretches like this in the past. It’s a shame that one person or a couple people can do something really stupid and hurt the whole country.”

Despite the challenges Dawson said it has been a good career choice, and one he would encourage for his sons to pursue.

“If they came to me right now and said they wanted to be troopers, I would still encourage it,” he said.

His sons, Matt Tingley and David Dawson, are both officers with the MSP. Tingley is a sergeant at the Brighton Post #12, and Dawson is a trooper at the Hart #62 Post.

“They wanted to follow in dad’s footsteps,” he said.

Dawson’s sons are not just following in their father’s footsteps. Dawson was not the first police officer in his family. He was inspired by family members on the force before him. He had an uncle who was an officer in Flint, as well as some family friends who worked in law enforcement while he was growing up.

“I thought it was a very interesting career,” Dawson said. “I thought I could get out and help people and try to solve some crime. That’s what drew me to it in high school.”

Now, after being on-call for the majority of his time as a MSP officer, Dawson looks forward to spending time with his wife and family.

“In retirement, I’m looking forward to doing some traveling with my wife, and seeing and hanging out with the grandkids,” he said. “I have seven grandchildren, and more on the way.”

Area superintendents introduce phase-in to back to school

NILES — Two area superintendents have announced phase-in approaches to back to school for the fall. With the unique challenges... read more