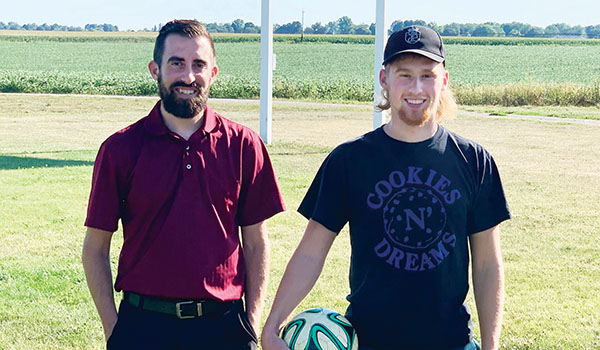 Cassopolis brothers say they are lucky to be alive following electrocution

CASSOPOLIS — A series of good fortunes played a key role in brothers Austin and Lane Francis still being alive after being electrocuted while preparing for a celebration of their father’s life on July 25.

The brothers were moving a sailboat at their brother, Gavin’s, house that was going to be used during the celebration. The two have moved plenty of sailboats and knew to be aware of overhead powerlines.

For some reason, however, on this particular day, they both missed seeing the power line that the mast came in contact with, which electrocuted them.

“We always check for powerlines,” Austin said. “Why we missed it that day, or what was going on, I don’t know. But for some reason, neither one of us saw it.”

According to Austin, both techincally died at the scene.

Then came the series of fortunate events that saved their lives and has allowed them to get back to doing the things they love, including standing on the sidelines coaching soccer at Cassopolis High School for Austin, and being a college student for Lane.

The brothers’ mother, Janet Francis Reid, and sister-in-law, Paige Francis, both came to their rescue. Both are nurses and have medical training, which allowed them to begin CPR as soon as rescuers were able to get them away from the sailboat.

“The real miracle of it was that my sister-in-law, who did CPR on my brother, and my mom, who did CPR on me, weren’t supposed to be there. We told our mom not to come out there and to work on stuff at home,” Lane said. “But for some reason, she was out there. My sister-in-law and Gavin, our brother, were supposed to have left five minutes before it happened. They were just running behind. Really, no one was supposed to be there.”

“It very easily could have happened, and somebody would have shown up and found us gone,” Austin added. “I think with them being there at that specific moment, and them being able to start CPR right away, really helped tremendously.”

The next moment of good fortune was when Gavin called 911, but being rattled by the entire situation, made emergency dispatch send multiple units to the scene. That meant instead of one Cass County Sheriff’s Office car arriving with one AED device, multiple cars arrived with another AED, as well as emergency rescue workers.

“Basically, they sent everybody,” Austin said. “The fact that two police cars showed up with two AEDs within five to seven minutes, it really was a miracle.”

The two were taken to Memorial Hospital in South Bend, one by ambulance, while the other was airlifted. They were both later transferred to Fort Wayne to be treated for their burns.

Austin and Lane are both on the way to full recoveries. Lane still has some healing to do on his foot, while Austin has been cleared to return to work and the sidelines, a place he says will be very emotional when Cassopolis gets to play its first soccer match.

Neither Lane nor Austin can recall much of that day. In a way, Austin said, that may be a blessing.

Austin said a lot of his recollection is from what people have told him about what happened and going through his phone and text messages he has received.

Lane said that his mom woke him up at the hospital and had to tell him what had happened.

He said he was even more confused when he got the answer.

“How in the world did that happen?” Lane remembers asking.

After finding out how his brother was, his mother explained in greater detail the events of that day.

After waking up, both noticed they had bandages on and had received burns, but neither really remembers asking if they were going to be OK.

“I don’t specifically remember them telling us that, but I do remember asking what I needed to do to get out of here [the hospital],” Austin said. “That is probably when they told me my situation.”

Being positive people to begin with, Lane and Austin are not sure their perspective on how precious life is has changed. That might be in part to having already come to that realization earlier this year after their father’s death.

“I don’t want to say it has changed drastically,” Austin said. “I would say the big thing is to not take life for granted. Not that I really necessarily did before, but I think for me, it is very interesting having the experience of going through that and basically dying or being close to death, and waking up, and it has been amazing thing to have such support and prayers.”

Austin also learned about the impact that he and his brother have made on other people’s lives.

“To see messages from friends, people I know and people I didn’t know,” Austin said. “To hear their thoughts and the experience they went through, it is kind of cool to see the impact you have had and how God has used your life to comprehend that people are watching the actions I make and the things I say. Knowing that, I need to be more careful. There are more people watching and taking notice than I expected.”

He added that everyone has a purpose in life, and God has given him a lot of purpose.

Now, he wants to fulfill that to the best of his abilities.

CASSOPOLIS — In July, many Cassopolis residents chose to round up their grocery bills to the nearest dollar. By doing... read more