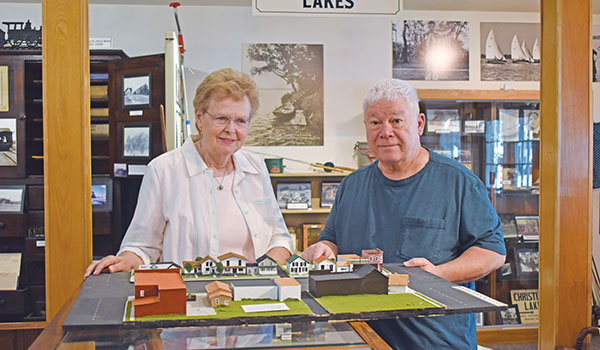 EDWARDSBURG — Longtime Edwardsburg residents may remember walking down Main Street and passing by W.M. Walter and Bro. General Merchandise or peering into the windows of the Sinclair Service Station.

Today, many of the businesses and structures that once lined Main Street no longer exist. However, one area resident has made it possible for residents to visit those old haunts — just at a much smaller scale.

Edwardsburg history buff Tom Haikin recently built a diorama of Edwardsburg’s Main Street, which he said depicts an era between the 1950s and 1990s. He donated the diorama to the Edwardsburg History Museum, where it will be displayed and available for viewing.

“Almost all of this was built from black and white photographs,” Haikin said as he explained each building’s history in the diorama. “You look at this, and there are tons of fascinating stories to be told. I’ve learned so much just by building this.”

Though Haikin has only lived in Edwardsburg for three years, he has been captivated by its history. He has already written two books about the village, “The Edwardsburg Mysteries,” a fictional account, and “The Edwards Family of Edwardsburg,” a nonfiction book that he spent two years researching.

“In other places we lived, you could find out just about everything you wanted to know about its history easily,” Haikin said. “Here, there were only a few sources on the early history. You had to go searching. … It’s a fascinating history.”

It was this love for history that led Haikin to make the diorama. He initially got the idea to make a diorama around Christmas time as he watched a model train run laps around his holiday tree. He decided he wanted to make something to go with it but knew he needed to practice first. Armed with two books’ worth of research on Edwardsburg’s history, he decided a downtown replica of years past would be the perfect practice model. He started making the model last November and recently finished the project with the help of family members.

Wednesday, Haikin officially presented the diorama to the Edwardsburg History Museum Board. Chair Sally Dalrymple said she found the diorama to be a fairly accurate depiction of 1950s-era Main Street, adding she was grateful it would be displayed at the museum.

“We just think this is a very important piece of history. I was a teenager in the ‘50s, so it’s also really important to me,” Dalrymple said. “We are excited to share this with the community.”

Following Wednesday’s presentation, Haikin said he was hanging up his diorama tools for now and is not sure when, or if, he will get around to making the Christmas model he wanted to go with his train, saying the diorama process is more work than most people realize. Despite this, he said he was delighted to have made the model of Main Street and is happy that Edwardsburg residents will be able to enjoy viewing it at the museum.

“It’s a relief to see it at the museum,” Haikin said. “I’ve been working so hard on it since last November, and now they have it. I hope people will enjoy it.”