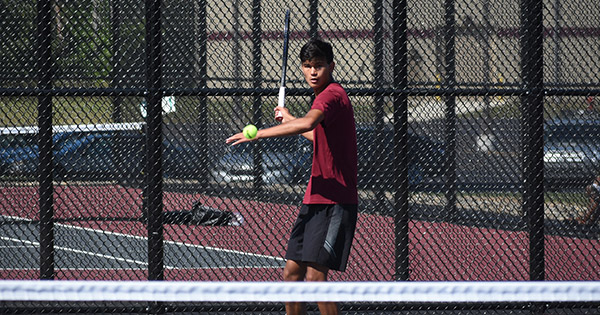 Jacob Fox and the Brandywine tennis team opened their season with a 5-3 win over South Haven Wednesday. (Leader photo/SCOTT NOVAK)

NILES — It was a special day at Brandywine as the Bobcats christened their new tennis courts and veteran coach David Sidenbender picked up his 100th career coaching victory.

Everything was new at Brandywine on Wednesday as the Bobcats played their first home match at the high school in more than 30 years. Brandywine also faced off against the newest member of the BCS Athletic Conference, South Haven. 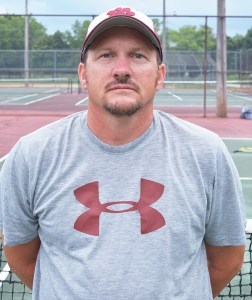 The Bobcats won three out of four doubles flights to post a 5-3 victory in the season opener for both schools.

“It felt good to be out, watching the kids compete after everything that has been going on,” Sidenbender said. “Especially playing on one of the premier new facilities around. And to top it off, the kids came out and made it a winning debut. I couldn’t ask for anything more.”

Sidenbender said that winning 100 matches is about having talented kids.

“It’s something I never thought about, it just snuck up on me,” he said. “Milestones like that are more a testament to the players you have over the years and their dedication. I’m real proud of the guy and girls I’ve been privileged to coach.”

Caleb Bryd and Josh Sachman picked up a victory at No. 1 doubles, while Carson Knapp and Gabe Gouin were winners at No. 3 doubles.

The Bobcats are back in action on Monday as they head across town to face the other new member of the BCS, Niles. Brandywine and the Vikings are scheduled to begin play at 4:30 p.m.