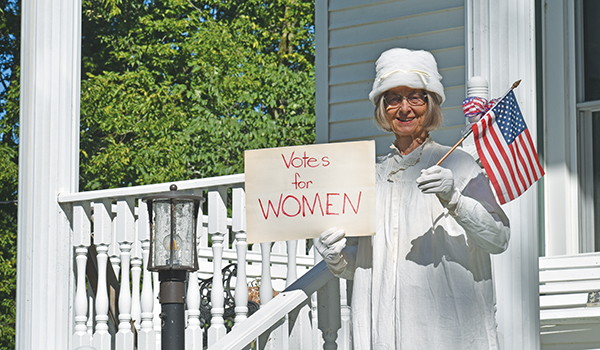 EDWARDSBURG — One Edwardsburg woman celebrated the centennial of her right to vote in style.

Tuesday, the U.S. celebrated the 100th anniversary of the ratification of the 19th Amendment. The amendment, which reads “the right of citizens of the United States to vote shall not be denied or abridged by the United States or by any state on account of sex,” effectively granted women the right to vote.

Across the country, women celebrated the amendment’s 100th anniversary Tuesday. Closer to home, Joyce Brown, 84, of Edwardsburg, commemorated the occasion by dressing up as a suffragette, someone who would have fought for women’s voting rights in the early 20th Century.

“I knew the anniversary was coming up, and I thought to myself, ‘Joyce, you should celebrate,’” Brown said. “My son said I ought to march somewhere, but I didn’t know of any, so this is what I decided to do.”

Armed with a vintage dress, an American flag, a sign that said “votes for women” and a cap that was owned by her mother, Brown donned the outfit and took pictures to share with family and friends to commemorate the occasion. Brown said she was excited to wear her mother’s cap as her mother was alive and 10 years old when the 19th Amendment was ratified.

“I had a mother who was so fond and thankful for American history,” Brown recalled with a smile. “That’s my encouragement. We should appreciate what has been done for us and the circumstances surrounding it.”

In addition to her outfit, Brown also celebrated by keeping with her a book containing the music from “Mary Poppins.” Brown said she was inspired by the musical’s song, “Sister Suffragette,” which includes lyrics such as, “We’re clearly soldiers in petticoats and dauntless crusaders for woman’s votes” and “Our daughters’ daughters will adore us, and they’ll sing in grateful chorus, ‘Well done, Sister Suffragette!’”

“They were right,” Brown said. “I get choked up thinking about what people have done for us in the past.”

Brown said she chose to dress up as a suffragette not to bring attention to herself, but to celebrate the history of the 19th Amendment and the women who made it possible.

“This isn’t about me. It really is not about me,” Brown said. “This is about appreciating our past and our history. This is 100 years. We should study it and celebrate it.”

Though the 100th anniversary of the ratification of the 19th Amendment has now come and gone, Brown said she would continue to study American history and be grateful for the things done in the past that allow her to have the rights she does today. Next up, she is looking forward to Constitution Day, which falls on Sept. 17, and exercising her right to vote in November.

EDWARDSBURG — Thanks to the recent donation of a local business, Edwardsburg police officers can now set sail on the... read more