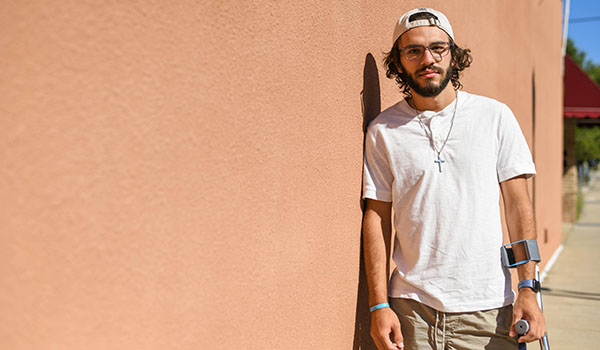 NILES — Caiden Baxter wants to be king of the court — the tennis court, that is.

A 2019 graduate of Niles High School, Baxter has been hard at work developing his skills as a wheelchair tennis player with the University of Michigan’s Adaptive Sports Program.

“It’s actually been pretty great this summer,” he said. “I’ve been able to practice four days a week because I’ve had so much time. I had a tournament last weekend, and I took first in the division for both singles and doubles. I’ve only been playing a year, and I’ve progressed that much.”

After suffering from a spinal cord injury in October 2016, which left him with partial paralysis from the waist down, Baxter spent countless hours in rehabilitation. Now, he has reached the point where he can walk with the use of a crutch. While Baxter continued to rehab, he was introduced to adaptive sports shortly before his freshman year at the University of Michigan. Adaptive sports are competitive or recreational sports for people with disabilities.

Sports had always been an important aspect of Baxter’s life, but he did not realize how much sports meant to him until after the injury. 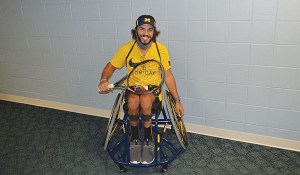 “I’m a very competitive person,” he said. “I was really lacking in the sports department after my injury. I forgot how much I did sports all through middle school and the beginning of high school. I forgot how much it just helps your mental well-being and how it keeps you from being stressed and you’re able to just get some of your anxieties out through the sport. It also helps me, physically. I feel a lot better. I’m a lot more energized when I’m able to get exercise, so having a physical impairment like this makes it a little harder to be able to get my heart rate up so I just learned that sports are a fantastic way to do it.”

Founded in 2018 by Dr. Oluwaferanmi Okanlami, an assistant professor of family medicine and physical medicine & rehabilitation at the University of Michigan, the U-M Adaptive Sports Program provides disability education and access to physical fitness to student-athletes, learners, patients and the community.

“I was introduced to wheelchair tennis by the program,” Baxter said. “I didn’t play tennis before, but it’s great because you don’t need a ton of people, and it’s not a close contact sport, so we were able to learn how to move and be able to play the sport with a couple of people.”

Baxter was recently named an Adaptive Sports Scholar by the program and has enjoyed seeing the program grow.

“I think it’s been pretty cool, actually,” he said. “I was one of the two athletes that we had last year on the tennis team because you only need two to compete. It’s just been super cool to see how the program grows and to be able to meet everyone that’s doing behind the scenes work, and I think it’s just provided us with a lot more experience. It’s what you would normally get if you were just on a team.”

Baxter learned that playing tennis from the seat of a wheelchair presents a unique set of challenges.

“The big thing with standing tennis is that, when a ball is coming at you, you’re able to step to the side to get it,” Baxter said. “You can’t do that in a wheelchair, obviously. So the big thing for me was learning to move around the court, because you have to be able to do like a figure-eight motion to scoot over a couple of feet in order to reach the ball.”

In February, Baxter attended the 2020 All Comers Camp at Salt Lake City, Utah. The All Comers camps are designed to provide instruction and play opportunities for anyone of any level who is eligible to play wheelchair tennis.

While he may be relatively new to the sport, he is ready and willing to showcase his talents at the national level.

“I would love to compete for the collegiate nationals with the team,” Baxter said. “We were scheduled to go this year, and obviously when the coronavirus hit, all competition was canceled for the spring. So we were not able to go there, but I’ve been able to grow with the program. Our program is growing, we’re getting more players as the years go by so i’m super excited to be able to have that experience with them and to progress at a fast pace.”

Baxter has also tried his hat at sports such as wheelchair hockey, sled hockey and adaptive skiing, which was quite the experience for him.

“I did adaptive skiing in Utah while we were out there training,” he said. “They kind of just took us to the top of the mountain and let us learn as we went. It was a little scary, but it was a pretty cool experience.”

The COVID-19 pandemic may prevent the wheelchair tennis team from competing this year, but Baxter is still optimistic that the upcoming school year will be a positive one for the program.

“I think it’ll be alright,” Baxter said. “With the build of our program, even if it’s from a distance, we’ll still be able to recruit more players and get more of the behind-the-scenes work done for our program. We’re actually working on a basketball team right now for competitive, so we’ll be able to do that and we have some track and field stuff happening in the program, so it’ll be nice to be able to do that side of it also.”

Baxter has experienced the benefits of adaptive sports, and hopes others can experience it, too.

“I would say you just have to get out of your comfort zone and try it,” he said. “It was kind of scary for me when I first had my injury. I was introduced to wheelchair basketball first and I was very worried about getting hurt and about not being good at the sport, and I had played basketball before but it’s completely different in a chair. You just have to re-learn everything about all of the movements and the rules of the game. But it’s just a different feel, so I would just say you have to get out and try it and keep trying different sports. Even if you tried basketball and you’re not a fan of it, there is tennis, hockey, track and field and all these different sports that you can get involved in, and I think it’s just very beneficial.”

NILES — The Niles Community School board of education met for a virtual, special meeting Thursday evening. The meeting was... read more