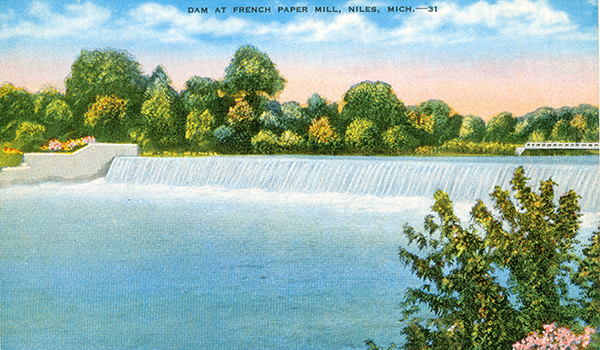 Like so many cities, Niles was built on water power. The swift waters of the St. Joseph and Dowagiac Rivers appealed to early industrialists looking to build dams for powering mills to supply grain and lumber. Later, dams served as a power source before the widespread use of electricity.

Published in 1906, Judge Orville Coolidge’s “Twentieth Century History of Berrien County, Michigan” describes a mill powered by a log dam built across the Dowagiac River by Mr. Eli Ford. According to Coolidge, in 1827, Mr. Ford moved to the area once called Pokagon Prairie, just northeast of Niles. A year later, he established a successful flour mill. Farmers from all over brought their grain to Ford’s mill for grinding. In 1829, Ford expanded and opened a saw mill at his dam.

Ford’s mill was the first to utilize water power in the region. Others soon followed. A dam and saw mill were constructed on Kinzie Creek north of Ford’s mill. Benjamin Moses built another saw mill at the mouth of Bertrand Creek to the south.

Harnessing the power of the St. Joseph River proved more difficult. In 1829, pioneer settlers Ephraim and Elijah Lacey built the first saw mill in today’s city limits. A year later, they added a grist mill. Although located close to the St. Joseph River, they still utilized water power from the narrower Dowagiac River or its tributaries via a mill race, a human-made channel that diverted water from its source to move the waterwheels.

Yet Nilesites recognized the potential in damming the larger river and in 1842, the Niles Hydraulic Company was formed. The company started work on a wooden dam near the foot of Main Street. Because river travel was still common, a lock placed at the west end of the structure allowed boats to pass through. In 1843, with work on the dam nearly complete, a flood destroyed it, resulting in a total loss for the Niles Hydraulic Company.

The company tried again, even going as far as employing engineers to explore the river and present a feasibility report to the community, but they never achieved their goal. In 1866, work began on yet another dam, though this time they focused their efforts south of the downtown area. Before the project was completed, however, the Niles Hydraulic Company faced bankruptcy.

Upon hearing this news, local citizens formed the Niles Manufacturing Company. They bought out the Niles Hydraulic Company, and in 1869, contracted for the construction needed to finish the dam. In 1871, the first “permanent” dam was completed on the St. Joseph River in Niles. Thanks to the availability of water power, local industry bustled along the St. Joseph River. One of these early companies was the Michigan Wood Pulp Company, now known as the French Paper Company, which still owns and uses the dam today.

After Eli Ford left the area, other mills and dams continued to operate at the same site. In 1928, the city of Niles built a new dam and power plant at Pucker Street near the site of Ford’s 1828 venture. As these structures were being removed to restore the river’s natural course, evidence of Ford’s dam was uncovered. This “legacy dam” will be studied and recorded. For us historians, finding physical evidence of structures we had only read about is very exciting. We look forward to interpreting the Ford Dam and Mills at the Niles History Center once this project is complete.

PUCKETT: God is not dead

The virus rages, fear stalks, people quiver, but God has not moved. You may ask, “Why is God allowing this... read more