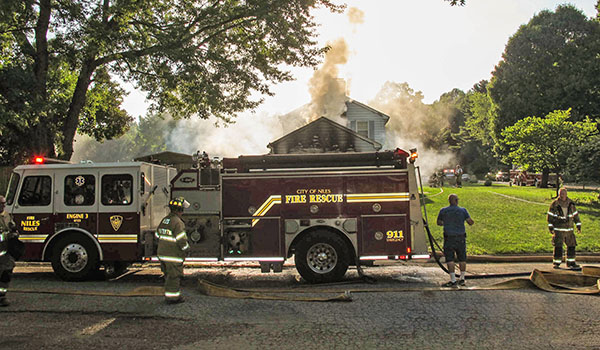 NILES — The Niles Fire Department has reported that no injured occurred in a Monday evening fire.

Units were called to the scene on the corner of Skyline and Rolling Hills Monday evening on reports of a fully involved garage fire that had spread to the main house before 7 p.m. Monday.

According Niles Fire Chief Larry Lamb, the fire began in a shed near the garage and spread to the garage before making its way to the main house’s attic area. By 7 p.m. Monday, the fire had been contained, leaving the home with fire and water damage.

At this time, the cause of the fire is unknown, but Lamb said all possible causes are accidental in nature.

Lamb said the homeowner and his pets were alerted to the fire by a neighbor and were safely evacuated with no injuries.

This is a developing situation. Leaderpub.com will be updated as more information becomes available.

NILES – The case against the man accused of giving drugs to an underage girl and allowing aggravated child sexually... read more