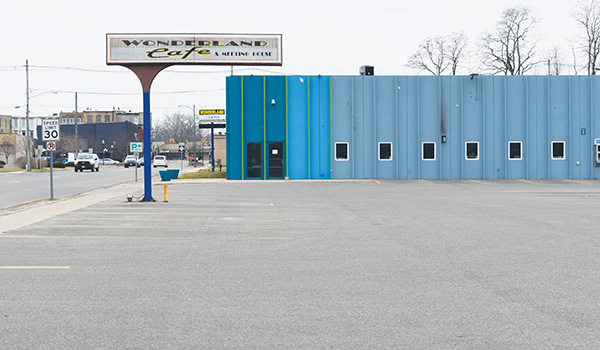 The five buildings throughout Michigan that comprise Moore Theatres would show the newest movie releases through the years, with Hollywood’s biggest names gracing the screens that have been empty of patrons for five months.

Heavy COVID-19 mandates have kept patrons out of Michigan cinemas. In addition to the mandates, the Moores say there has not been any additional aid for a business like theirs to take advantage of.

In lieu of Moore Theatre’s regular revenue stream, the owners have been trying to find creative ways to generate income.

The Wonderland Cinema has shown past movie favorites, like “The Incredibles,” and most recently the animated feature “Spider-Man: Into the Spider-verse” for free to attendees in Riverfront Park. The owners and staff hope attendees will purchase concessions to enjoy while watching the film, or to take to-go for at-home movie nights to help generate revenue while the owners cannot show movies indoors. The next, and last, movie in the park currently scheduled to be shown is “Onward.” The movie will begin at 9:30 p.m. on Friday.

“The town has been very supportive of those,” Carol said.

This is not the first time the Wonderland Cinema has been closed for an extended period, but currently meeting the five-month mark for closure is a new challenge for the company.

In late February 2018 when Niles experienced flooding as the St. Joseph River spilled over its shores due to storms, Wonderland Cinema was shuttered for around a month as the owners repaired the water damage.

“I thought it was tough going through the flood, but I had no idea,” Carol said.

According to Carol, the Wonderland Cinema is equipped with hand sanitizer, scanners payments can be made touchless and plexiglass barriers have arrived. But with no reopening date set, the barriers have not yet been installed.

“We are just waiting,” she said. “I’m very concerned about keeping my employees. That’s my major concern, along with keeping everybody safe and healthy.”

Co-owner Steve Moore said once they get the call to re-open the theaters, he expects it to take about a week to get ready.

“We’ll do a deep clean and get everybody up to speed,” he said. “We can’t do the self-serve popcorn or the fill-your-own drinks.”

He hopes they will be able to soon open to 50-percent capacity.

Steve said he has been in contact with other theater owners and watching the solutions they are trying out. With limited product coming from the major motion picture studios, the solutions may be creative.

“I’ve done some research into Xbox and Playstation 4,” Steve said. “That could be a possibility.”

Steve said he has seen a few theaters around the country able to rent out theaters to private groups to play videos games in. He had his son test a basketball video game in one of the theaters, and found the sensor from the controller worked well in the space. He said his son told him the added feature of surround sound elevated the gaming experience, as if he were really in a sports stadium.

The progress has been slow to get answers around potential re-opening rules and regulations from Michigan’s government officials, but Steve remains hopeful for reopening opportunities soon.

“I’m just trying to read, watch for information and Zoom as much as I can,” Steve said. “Just following the protocols everyone has previously set.”

In addition to some of the alternative ideas like gaming and private theater rental, Carol hoped that with re-opening, some revival for popular, classic movies would come as well.

“Maybe we can have some oldies and can get some ideas going,” she said. “We are just waiting for approval from the government.”