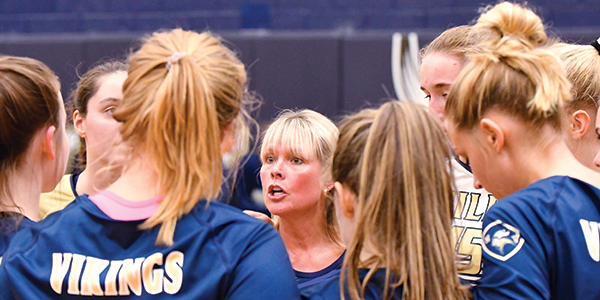 Niles volleyball coach Jenny Nate, like everyone else, is awaiting word from the MHSAA about the 2020 season. (Leader file photo)

Volleyball awaiting word from state on competition as practice begins

NILES — Volleyball coaches throughout the state of Michigan are awaiting word from the Michigan High School Athletic Association about its 2020 season.

Volleyball teams will be able to practice starting today, but not inside a gymnasium, which is still currently closed under the state of Michigan guidelines. As far as playing games as scheduled, the MHSAA has said it would make a decision no later than Aug. 20. Currently, under Michigan’s state of emergency, only groups of 10 or less can gather inside.

Since late June, area volleyball teams have been following the MHSAA guidelines about summer workouts. Those guidelines will remain in place with a few additions that the state released last week when it announced fall sports practice would begin on time for each sport.

“First off, I’m still waiting to hear about what we are going to be doing with volleyball in general,” said Buchanan coach Shelly Bender. “We still aren’t allowed inside the gym. I have been hosting workouts outside. We won’t know more information until Aug. 20. So, I’m just keeping my fingers crossed that we can go inside and play soon.”

In addition to the current conditioning guidelines, high school volleyball teams may begin workouts in “pods” of students of the same five to 10 (including coaches and participants) always working out together. Balls may be passed/shared provided students wash their hands before and after practice.

Volleyball is one of three sports the MHSAA considers high-risk, along with football and soccer. Those sports currently will not be allowed to compete against other schools until after the state has decided how it plans on moving forward with fall sports.

Tennis, golf and cross country, all considered low-risk sports, will begin competition on time, either Aug. 19 or Aug. 21, unless the state decides differently by the Aug. 20 deadline it set for itself.

Veteran Niles coach Jenny Nate said her team has been trying to be creative while working on its summer conditioning.

“We are waiting for instructions from the MHSAA and the governor at this point to move forward,” she said. “But we have spent the summer training safely on an outdoor beach court as well as doing outdoor conditioning while adhering to all guidelines. The players and their parents have all been awesome and supportive.”

Nate has been watching closely what Indiana volleyball has been doing to help create a plan for getting official practices under way. She has also been talking with colleagues.

“I have had several Zoom meetings with coaches throughout the state to brainstorm and discuss ideas to make sure we all continue to work together in order to get our athletes playing ball once we are given the go ahead from the proper authorities,” she said. “If we are allowed to play ball, we are ready to follow the guidelines and make it happen so that our players can get back on the court. I have various plans laid out including drills that adhere to social distancing, working in pods, etc. or whatever is necessary in order for us to play ball.”

Neither Bender or Nate know exactly what is going to happen when it comes to fans.

“As far as spectators go, we are currently in the same boat as I am in as an educator,” Nate said. “We don’t have all of those answers yet, and we are all just waiting for further information and guidelines before we can safely move forward. But I promise you we are being proactive and have plans in place and continue to prepare for any and all scenarios.”

“The truth is, we are still trying to figure things out,” he said.  “I had hoped we would be able to start indoors. It will be a lot tougher to run an efficient tryout and practice outdoors. Right now, I don’t even have an outdoor court to practice on. The school is working on providing something by Wednesday. I have a parent that will allow us to use their sand court, which is very nice, but sand plays much different than a hardcourt does.”

Hooley noted the additional challenges of practicing outside.

“Practicing on sand limits speed and vertical ability,” he said. “Grass and dirt surfaces are better in those aspects but discourages diving and scrappy defensive play. Grass could also increase the chance for injuries if it becomes slippery since the players won’t be wearing cleats. Boundary lines are often irregular and rarely are outdoor nets even close to competition standards. And finally, not many coaches will want to bring their nice, expensive volleyballs and carts outside due to the harsher wear and tear they will receive.”

Hooley understands that all schools are in similar situations.

“The conditions are certainly not ideal, but every school is experiencing them equally,” he said. “I do not speak for other coaches, but I would rather have the season pushed back a few weeks, maybe even to the spring, if it meant being able to practice indoors and participate in tournaments. I don’t mind the other safety guidelines nearly as much if we move forward. Most of them will be easier to adjust to compared to the gym ban.”

BERRIEN SPRINGS — Though the Berrien County Youth Fair was canceled this year due to the COVID-19 pandemic, its organizers... read more